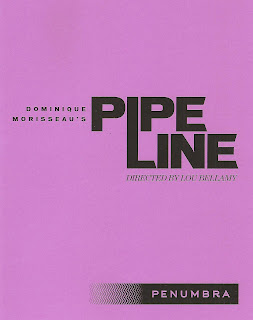 Penumbra Theatre has produced several works by Dominique Morisseau* (including Detroit '67 and Sunset Baby), and is now bringing us one of her newest plays - Pipeline. They're all really powerful plays about the African American experience, and Pipeline deals with racial inequality in our schools, which is a very real problem here in Minnesota. The title refers to the idea that some schools, with their heavy security and overly strict rules, are preparing students of color not for college or careers or life, but for prison (see also Wyatt Cenac's Problem Areas). The playwright explores these issues through a specific story of one family, one student trying to navigate the world as a young black man, a world that in many ways was set up to fail him. The result is a really powerful and sobering, sometimes funny, and very human 90 minutes of theater. And it goes without saying that Penumbra's production is all-around excellent.

Nya is a teacher at an inner-city public school, but she sends her only son Omari to a prep school upstate. That may be due to the influence of her ex, Xavier, who thinks he's giving his son a better life. But Omari feels picked on, singled out by his teachers, which results in a violent incident that threatens to get him expelled. Nya is in crisis mode, desperately trying to save her son. Her relationship with Xavier is strained, and Omari sees his father as someone who always sends the checks, but isn't there for him in the ways that matter. Not only is Nya dealing with schools as a parent, but also as an employee. She see inequalities and troubled students where she works as well, along with fellow teacher Laurie (a self-described tough white chick, whose biggest problem with her daughter is that she's obsessed with mascara) and security guard Dun. The most powerful moment in the play for me was when Nya, defending her son to the school board, says, "rage is not his sin, it's his inheritance." What is a mother to do when her child, for whom she would do anything, is born into a world that is stacked against him?

This excellent cast is led by Erika LaVonn as Nya, last seen on #TCTheater stages in Penumbra's The Mountaintop at the Guthrie. She's so fantastic here - natural, vulnerable, strong, and so believably human. She has a nice awkward chemistry with Ansa Akyea as her ex; their conversations are filled with tension and years of unspoken hurt. Melanie Wehrmacher manages to make Laurie both empathetic and infuriating, Darius Dotch is smooth and charming as Dun, and Kiara Jackson is pretty adorable as she adds some lightness and humor as Omari's girlfriend Jasmine. Last but definitely not least, Kory Pullam goes to such deep places of raw emotion as Omari that it'll break your heart.

The entire play takes place in front of a dreary gray cinder block wall, the kind found in schools, hospitals, and prisons, broken up only by an industrial door. Interchanging set pieces transform this space from the school break room, to a dorm room, to a living room, to a waiting room. The blank wall is great for projections, including video of a busy school hallway, and the words of the poem "We Real Cool" by Gwendolyn Brooks, which holds significant meaning for Nya and her son. (Set design by Vicki Smith, projections design by Kathy Maxwell.)

Penumbra is a gift to our community. Telling important stories about the world we live in, bringing light to these issues, expanding our perspective and understanding of the world through the disguise of entertainment. This play is yet another example of that.