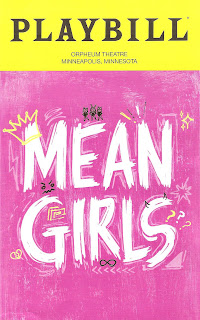 High school is horrible. It was horrible when I was in high school 30 years ago, it was horrible when the movie Mean Girls came out 15 years ago (depicting the many and varied ways kids can be horrible to each other), and I can only imagine that it's even more horrible now with the addition of social media as a way to expedite bullying and the pressure to achieve a certain image. Last year's Broadway musical adaptation of the 2005 movie has updated the story to include modern elements and references, but at its heart it's the same smart, funny, feminist (sort of, eventually) story of the struggle to find oneself and be oneself amidst the pressures of life, as amplified by the high school experience. It may not as clever, original, or modern of a high school musical as, say, Ride the Cyclone, the Off-Broadway musical currently playing at the Jungle Theater to sell out crowds. (Mean Girls musical was nominated for multiple Tony Award but did not win any, 2018 being the year of the exquisite The Band's Visit, coming to the Orpheum in December.) But it's still a lot of fun, with a good message in the end, and it has a built in audience of several generations of former, current, and future teenagers who love the movie. Minneapolis is the first stop of the first national tour, and it's staying for two weeks. Click here for info and tickets, including details of student/educator rush tickets.

Mean Girls, the musical, was written by wife/husband team Tina Fey (who adapted the book from her movie screenplay) and Jeff Richmond (music), with lyrics by Nell Benjamin (who co-wrote the music and lyrics for Legally Blonde, a show I loved when I saw it at Lyric Arts earlier this year). I've seen the movie, but not often and not in many years, so I watched it yesterday before seeing the musical adaptation. They've stayed pretty close to the plot, characters, and even dialogue of the movie, but with some updates to make it clear this is 2019, not 2004. Social media is included not as a huge focus of the story, but as a modern way that the rumor mill moves, and new lines refer to current issues and people.

For those unfamiliar with the movie (which was based on the non-fiction book Queen Bees and Wannabes), the main story is that of 16-year old home-schooled Cady, who enters high school for the first time when her family moves from Africa to a suburb of Chicago. Cady finds friendship within the strict social structure in fellow misfits Janis and Damian. But when she's asked to sit with the popular girls (aka the plastics) at lunch, her new friends concoct a scheme to bring down the leader of the group, Regina George. In doing so, Cady begins to like the attention and lifestyle of the popular clique, and realizes she has become the very thing she hated the most. But don't worry, everyone learns their lessons, repairs broken friendships, and realizes that it's better to just be yourself.

This phenomenally talented and energetic young cast is led by Danielle Wade as Cady, possessing an effortlessly strong voice as she embodies this likable and relatable heroine with whom we empathize, even as she's making bad choices. Eric Huffman and Mary Kate Morrissey are both fantastic as Cady's pals, who have taken over the narration of the story from the movie's voiceover. Other highlights include the three women playing the plastics (Mariah Rose Faith as the epitome of the unreachable popular girl Regina, Megan Masako Haley as her biggest and most conflicted fan/friend/follower Gretchen, and Jonalyn Saxer as the adorably dense Karen), Adante Carter as the charming object of Cady's affection Kevin, and Kabir Bery as the rapping math nerd (spoiler alert: math nerds are my people and always my favorite characters).

The set design is dominated by projections; the physical set mostly functions as surfaces for them to be displayed on. But it works, and creates a sort of video game/cartoonish atmosphere for this show that is pretty big and broad. Costumes and wigs are also big and broad, and immediately tell us who these characters are. The dancing is fun and energetic (choreographed by director Casey Nicholaw), and the clever and catchy score is performed by a 10+ piece pit orchestra mostly filled with local musicians (spoiler alert: band geeks are also my people).

Perhaps the reason for the popularity of the movie (and musical adaptation) is that feeling the need to fit in is a universal feeling in all aspects of life, not just high school, although it is particularly amplified during that time of life. Feeling like a misfit, trying to find your group of people who will understand you, wanting to be your authentically weird self but worried how the world will see you, who can't relate to that? In this story we get to watch, laugh at, and empathize with people who stumble their way through the journey to self acceptance and kindness towards others.

Mean Girls continues through October 13 at the Orpheum Theatre in downtown Minneapolis.