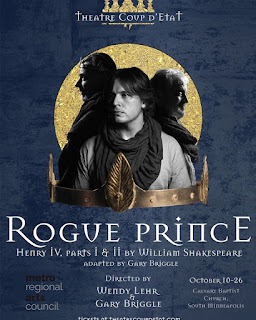 When Ten Thousand Things did an all-female production of Shakespeare's Henry IV Part I a few years ago, I wrote "and with a cliffhanger ending suitable for any movie franchise, I found myself wondering, when's Part II?" Well, here it is. Theatre Coup D'Etat brings us both parts of Henry IV, condensed into one play adapted by Gary Briggle, who also plays Falstaff and directs with his wife Wendy Lehr. These two plays combined tell the story of the "rogue prince" Hal, the son of Henry IV, and his journey from a careless young man who spends his time with criminals in pubs, to the soldier and King Henry V. This journey is presented with inventive staging in an intimate space that makes the audience feel as if we're there with them.

Act I of this roughly two-hour two-act play focuses on Hal's friendship with the merry and good-hearted sometime-thief Sir John Falstaff. Prince Hal continually brushes off his father, who is facing several threats to his crown and wants his heir to step up and fight. Hal eventually does, essentially choosing his father over Falstaff. In Act II, his journey to the throne continues as he leaves Falstaff and his old life further and further behind, ready to take the crown from his ailing father. Even though the two plays are condensed from their original combined length of probably 5-6 hours, it doesn't feel rushed or choppy. It still feels like a full and complete story, with moments of reflection, and includes some of Shakespeare's most famous lines such as "weary lies the head that wears the crown" and "the better part of valor is discretion."

The strong 11-person cast, although disappointingly lacking in diversity, ably plays the many multiple characters in this complicated story. As Prince Hal, James Napoleon Stone creates a believable journey from carefree kid to soldier to king. Gary Briggle is warm and funny as the affable Falstaff, and Bruce Bohne is the regal and weary King Henry IV. Anna Leverett makes the most of the roles of The Wife and The Kindly Prostitute, Damian Leverett is as entertaining as Hal's buddy as he is dignified as his brother Prince John, and Ben Shaw is a strong presence as Prince Hal's greatest foe. Rounding out the ensemble are Corey de Danann, Don Maloney, Kaylyn Forkey, Kjer Whiting, and Meg Bradley in multiple roles. There is a bit of non-traditional gender casting, which is nice because as we know, Shakespeare's plays don't have a lot of roles for women, especially the war-focused ones.

Rogue Prince is staged in the basement theater at Calvary Baptist Church in the Whittier neighborhood of South Minneapolis. The space has a stage at one end, and this production utilizes both the stage and the floor in front of it, with a single row of chairs forming the other three sides of the square performance space. The King and his court are always on stage, elevated and apart from the common people, while the scenes in pubs and other common locations are played out right in front of us, almost close enough to touch. Including some cool sword-fighting scenes (choreographed by Adam Scarpello). The cast is dressed in medieval period appropriate tunics, capes, and gowns (costume design by Chelsea Wren Hanvy).