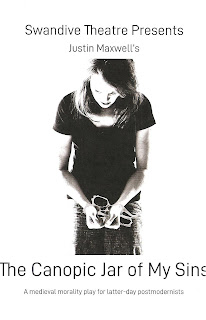 I've always believed that technology is neither good nor evil, it's how we use it that determines its morality. Nuclear energy can be used to create electricity, or to murder vast numbers of people. Facebook can be used to connect people across distances, or to bully and belittle people to catastrophic effect. But is that true? Are the people who made an amazing scientific discovery that went on to cause more harm that good responsible for that evil? Justin Maxwell's new play The Canopic Jar of My Sins explores that idea in the form a a medieval morality play that puts Ralph Wiley, inventor of one of the first kinds of plastic, on trial for the destruction that single-use plastics have caused to our planet and many species living on it. Swandive Theatre's production, playing for just three more performances at the Crane Theater in Northeast Minneapolis, will make you laugh, and think, and likely feel guilty for our thoughtless use of plastic. And maybe it'll also get you thinking about things you can do to help reverse the devastation, with help from the suggestions on their handout.

The Crane's intimate black box theater is entirely lined with blue plastic and strewn with plastic bags and bottles. Into this arena comes Ralph Wiley (Nicole Goeden) to face a tribunal comprised of an angel (Katie Kaufmann), a sick sea bird (Mairead Koehler), and Roger Waters (who Wikipedia tells me is a co-founder of a band called Pink Floyd, that I've totally heard of, played by Bethany McHugh). Accusations are followed by arguments as Ralph tries to win the case. And it's to the play's (and the performers') credit that we do feel some empathy for Ralph. Was he an evil genius, or just a simple scientist who enjoyed discovery? The tribunal was only really ever going to rule one way, and Act II takes us to Ralph's punishment, or afterlife, or something.

All of the garbage is cleared away at intermission, replaced by a cork floor representing an island. Easter Island to be precise. There Ralph is joined by an enthusiastic Easter Islander (also played by Mairead Koehler) and Robert Oppenheimber (Bethany McHugh again), who was also tried and sentenced for being "the father of the atomic bomb." The three are occasionally visited by the Angel as they try to figure out what they're doing there.

Everyone in the four-person cast, directed by Meg DiSciorio and Damon Runnals, are all fantastic and totally commit to the absurdity of the situation, while still making their characters strangely believable, even or especially at such close range. The design is very thoughtful and detailed, from the plastic trash everywhere, to the weird party popper confetti things, to the costumes that are businesslike for the scientists and fantastical for the angel and bird, to the crisp blackouts that differentiate scenes, even the make-up (I was fascinated by the angel's long glittery eyelashes that Katie slowly and meaningfully blinks). It's all-around very well put together. (Scenic design by Seán McArdle, costume design by Lisa Imbryk, lighting design by Jesse Cogswell.)

Wikepedia also tells me that "canopic jars were used by the ancient Egyptians during the mummification process to store and preserve the viscera of their owner for the afterlife" (I love a play that sends me to google to find out more). So Ralph is destined to carry his heart in the canopic jar of his creation (hilariously represented by a Sweet Martha's Cookie bucket, spoiler alert). I'm not any closer to answer the questions above, but maybe it's progress just to ask them. And this play is fun and entertaining while still dealing with these sobering and deep thoughts.

I'll leave you with this note from the directors:


Tackling Justin's script was never about finding answers, instead what we found was resolve. Everyone that worked on this show has left fundamentally altered, open to making significant life changes in the hopes that we can change the future and start to redirect the path we are on. Like its medieval cousins, this morality play is a warning. Rationality will not save us, but perhaps collective will can...