"A New Brain" at Artistry 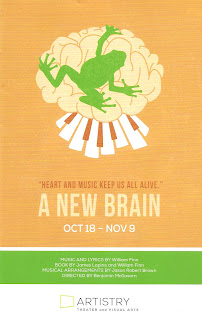 Artistry's production of the rarely done 1998 Off-Broadway musical A New Brain is exquisitely lovely, and everything I love about musical theater. After composer/lyricist William Finn (see also Falsettos and Spelling Bee) underwent a serious heal crisis due to AVM (it's a brain thing), he wrote a musical about it. Because that's what artists do. The result is a very honest, clever, silly, funny, poignant, beautiful look at life. My previous experience with the piece was a staged reading several years ago by Second Fiddle Productions*, a company that does readings of rarely done musicals. I'm thrilled that Artistry chose this rare gem of a musical for their 2019-2020 season and are bringing us this beautiful production with the dreamiest of casts. If you're a fan of music-theater, don't miss this show!

A New Brain feels very similar to Falsettos (the recent Lincoln Center revival of which came to the Ordway earlier this year) in that it's almost entirely sung through, and uses humor to look at the serious stuff of life. The music includes sung dialogue, and songs that are catchy and clever, or gorgeously poignant. It's such a great score that I just downloaded the 2015 Encores cast recording starring Jonathan Groff so that I can stay in the world of this show for a little longer (the original 1998 Off-Broadway cast recording is also available).

Gordon (aka William) is feeling stuck writing songs for the children's show about a talking and singing frog named Mr. Bungee, which keeps him from working on his own projects. All of this comes to a halt when he passes out at lunch with his BFF Rhoda and is diagnosed with AVM. His mother and boyfriend Roger show up to help him through the crisis, which includes an MRI (terrifying for someone with claustrophobia), a craniotomy (terrifying for everyone), and the long recovery process. He also sometimes sees Mr. Bungee in his dreams or hallucinations. Gordon is worried that he'll die before he's able to write all of the songs that he has inside him, but his music, friends, and family (and Mr. Bungee) help him through.

One of the wonderful things about this piece is that it's a true ensemble musical, with everyone in the ten-person cast getting a moment or a song or more to shine, in addition to the many group numbers. And director Benjamin McGovern has assembled a fantastic cast of #TCTheater talents, and beautifully guides them through the emotions of the piece with the perfect balance of silly and serious. Riley McNutt is just wonderful as Gordon and makes us believe and invest in his journey. C. Ryan Shipley is a charmer as his boyfriend Roger, and the two have a sweet chemistry. Jen Burleigh-Bentz is so strong and fierce and fragile (it's worth noting that she also performed in the Second Fiddle reading, at which time I wrote that she made me cry). Bradley Greenwald is hilarious as the bicycle-riding frog Mr. Bungee (not the first time he's played a frog - typecasting?), both the overly happy character and the grumpy man behind it. The dreamy cast also includes Caitlin Burns as Gordon's BFF, Evan Tyler Wilson as the nice nurse (with a showstopping "You Boys are Gonna Get Me in Such Trouble"), Mary Palazzolo as a homeless woman who provides commentary (in the form of gorgeous song) throughout, Reese Britts as a priest (note: Gordon is Jewish), Rodolfo Nieto as a doctor, and Sarah DeYoung as the not so nice nurse.

The simple and modern set (designed by Rick Polenek) features a raised circle in the middle of the stage, with ramps leading up to it on either side for the gurneys and wheelchairs, backed by four panels of white squares across which colors play. Behind the wall is Anita Ruth conducting the fabulous eight-piece band. Choreographer Heidi Spesard-Noble uses all of this space for the fun and charming movements she has created for the cast.

After beginning their season with the bland crowd-pleaser Footloose, Artistry has brought us a beautifully poignant production of the classic play Our Town, and now begins a string of rarely done musicals. Firstly, this practically perfect production of the gem that is A New Brain, continuing through November 9. Next up: the regional premiere of Jason Robert Brown's (who also did the musical arrangements for this piece) The Bridges of Madison County, and Mame. Kudos to Artistry for these making these bold choices, and doing it so well.

*With Skylark's recent production of The Most Happy Fella, all I need is for someone to do Blood Brothers and I will have seen full productions of all of the Second Fiddle readings I've seen. Anyone?