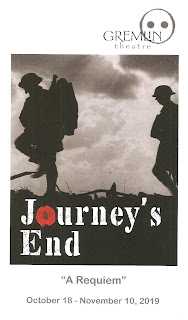 Written in 1928, Journey's End transports the audience to the trenches of WWI. British playwright R.C. Sherriff knew what he was writing about - he fought and was wounded in those very trenches when he was just 21 years old - making this an authentic account of war. The mundanity of the daily routine, the tension of waiting for something to happen, the horror when it does. It's all very palpable in a sobering three hours of theater (yes, three - take a nap and grab a cup of coffee). Gremlin Theatre's new production is directed by Bain Boehlke, returning to the piece 25 years after doing it at the Jungle Theater where he was Artistic Director. The strong 12-person cast of #TCTheater veterans and newcomers bring out the humanity of these characters and the horror of the situation.

The play takes place entirely in the underground bunker where the officers reside. A new company has just arrived at the trenches, including the five officers. Before we even see him, we learn that Captain Stanhope (Peter Christian Hansen) has a reputation for drinking whiskey and having a temper, but his right-hand man Lieutenant Osborne (Alan Sorenson) defends him. When we do finally meet him, it's clear Stanhope has a serious case of self-loathing, and drinks to be able to face the horrors of war. Osborne takes care of him when he's had a few too many; the two seem to be a good, if unconventional, team. The company of officers also includes the jovial and affable Trotter (Jim Ahrens) and the nervous and ill Hibbert (Kevin Fanshaw). A new officer named Raleigh (Benjamin Slye), who has just joined the team, turns out to have a previous personal relationship with Stanhope, whom he idolizes, which causes issues for our troubled hero. The company goes about their routine of taking shifts up in the trenches, sleeping, eating meals, and having tea, waited on by the efficient Mason (Caleb Wagner). When a Colonel (Craig Johnson) arrives to tell them of an impending attack, and a dangerous raid that the officers must make, things get serious. You know that a play subtitled "A Requiem" is not going to have a happy ending.

The cast works together very well; I especially admire the way the more inexperienced young actors really hold their own among the #TCTheater veterans. However, I would have loved to see more, well any, diversity in the cast. In a post-Hamilton world, it's no longer acceptable to say - British WWI soldiers were white so we're going to cast 12 white men. A more representative cast would make the play feel more connected to the world we live in now.

The design is so effective as to almost make one feel claustrophobic, like we really are underground in a damp, dark, cramped space. On Gremlin's thrust stage are a couple of (really uncomfortable looking) cots, a table strewn with candles and papers, and a few stools. Behind that is a hallway that leads to the kitchen on one end and the other officers' bunks on the other, and stairs that ascend to the surface, where most of the entrances and exits occur (these guys really get their stair workout in). The dark space is lit by candles, with varying light streaming down the stairs from up above. There's a constant rumble coming from the battle field, which increases to an almost unbearable level when things heat up. The large cast is dressed in detailed and very authentic looking uniforms. It's all very effective in creating an atmosphere of war. (Set design by Bain Boehlke, sound design by C. Andrew Mayer, lighting design by Kathy Maxwell, costume design by Amber Brown.)

One would hope that in the 90 years since this play was written, the 100 years since the events of the play took place, we would have learned something about how awful war is and how to prevent it. WWI was supposed to be The Great War to end all wars, but then it happened again 20 years later. And it's still happening all over the world; one look at today's news will tell you we haven't learned a thing. I'm reminded of my favorite Calvin and Hobbes cartoon, in which Calvin asks his dad, "Dad, how do soldiers killing each other solve the world's problems?" Dad just looks confused, and Calvin walks away saying, "I think grown-ups just act like they know what they're doing."