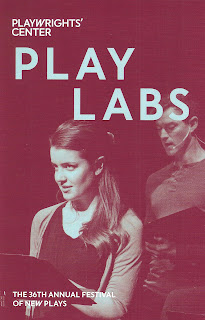 It's late October again, my #TCTheater friends, and that means it's time for my favorite fall theater festival* - PlayLabs at the Playwrights' Center! Every October, they invite three playwrights to workshop a new play and then host two free readings of each play throughout the week and weekend. A party and showcase of this year's fellows round out the weekend. This year brings an additional special event - a talk on the climate crisis, and the theater community's role in it, by Tim Guinee, a NYC-based theater/TV/film actor (including the 2005 Minnesota-made movie Sweet Land, one of my personal favorites) who founded an organization called Climate Actors. You can find information on all of the events at this link, as well as registration for the events.

Below is a summary of each of the three plays (all of which are read by incredibly talented casts of mostly local actors), as well as my thoughts on the two that I've seen (both of which have second readings this weekend).

New Life by Dan O'Brien
Monday, October 21 at 7 p.m.
Saturday, October 26 at 1 p.m.
Director: Michael Michetti
Cast: Tim Guinee and Dan O'Brien
Synopsis: The war reporter in Syria, the playwright in treatment for cancer—together they endeavor to sell a TV show. The conclusion of O’Brien’s trilogy of poetic memoir-for-the-stage, with The Body of an American and The House in Scarsdale, New Life dares to dream of healing after trauma and of telling the truth of war as entertainment. A tragicomedy.

My thoughts: This is an absolutely fascinating play and makes me want to see the whole trilogy, which covers the playwright's friendship with renowned combat journalist/photographer Paul Watson. This meta autobiographical play explores the parallel war stories of the two men: the playwright's battle with cancer, and the photographer's time spent in actual wars in the Middle East. Much of the play is constructed from emails they wrote to each other, as well as visits to each other. Projections showed us some of Paul's wartime images, which is very effective in the storytelling. He witnessed unspeakable horrors, making this a sobering play, but in the end it's inspiring to watch the two men's journeys through difficult times, and how their friendship (and pitching a kind of hilarious TV show) helped them through.

Cannabis Passover by Sofya Levitsky-Weitz
Tuesday, October 22 at 7 p.m.
Friday, October 25 at 7 p.m.
Director: Jeremy B. Cohen
Cast: Avi Aharoni, Chloé Bell, Michael Booth, Jay Owen Eisenberg, Laura Esping, Steven Hendrickson, Derek Lee Miller, Miriam Schwartz, Lori Wilner
Synopsis: A family gathers for their annual Passover seder in a rented house on a remote beach, this time with a new guest. As they perform the rituals, joke, provoke, argue, and imbibe, the lines between comic and tragic, sacred and mundane, ancient and everyday start to blur. In 2019, what does it mean to repair the world?

My thoughts: This play is the perfect family dramedy. Taking place over one long seder dinner with a family consisting of two brothers, their partners and adult children, and a new in-law, we get all of the hilarity of the awkward family dinner, this time with cannabis! This is a family that loves each other, and loves to argue with each other. Some of the discussions go a little deeper (let's talk about Zionism, or your mother who left the family), giving this fun and entertaining play a depth and richness. We go through all of the emotions with this messy and real characters, but in the end, this family tradition continues and binds these people together.

Pan Genesis by Marvin González De León
Wednesday, October 23 at 7 p.m.
Saturday, October 26 at 7 p.m.
Director: David Mendizábal
Cast: Alex Barreto Hathaway, Pearce Bunting, Alex Hernandez, Nora Montañez Patterson, Carley Rosefelt
Synopsis: Otti, Zaira, and Chico are bonobos. Andrés is a chimp. Bonobos are female-forward, peaceful, and sex-positive. Chimps are bros. Things get weird in this sexy and dark comedy set in an apocalyptic jungle where the group must set aside divisions of gender and tribe to survive the darkness inside and out.


*Of course there's another theater festival that happens every year in late October, and that's the Twin Cities Horror Festival. It's like a mini-Fringe Festival that's in one location only, with all of the shows related to horror. As I've said before, horror is not my thing, but I'm going to spend a day at the TCHF this year because a lot of the shows look really interesting and/or fun and/or are created by artists whose work I like. Shows begin on October 24 and run through November 3 (click here for more info).