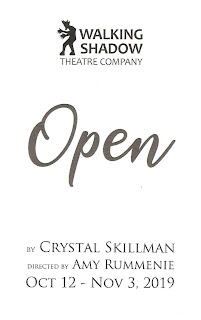 Apologies for the late notice (October was a really busy #TCTheater month), but you have just three more chances to experience a really unique and special show. Walking Shadow's production of Crystal Skillman's new play Open (this is just the second production!) is all around magical storytelling. And such a beautiful and tragic story it tells. In The Glass Menagerie, Tennessee Williams as Tom says the stage magician "gives you illusion that has the appearance of truth. I give you truth in the pleasant disguise of illusion." This play is definitely the latter. The playwright uses the framework of magic to tell an all too real story of a horrific hate crime. This "illusion" is beautifully realized by the entire team at Walking Shadow and #TCTheater favorite Allison Witham in her best performance to date. If you have a spare 65 minutes this weekend, I can't think of a better way to spend them than with Open (click here for info and tickets).

As we enter the theater 15 minutes prior to showtime, the Magician is sitting on stage with her eyes closed. Then the show begins, with magic tricks that we have to imagine, but are almost more thrilling because of it. Between the tricks the Magician tells her story, and we learn that it's one of love and loss - the greatest joy and the greatest tragedy. She shares the stages of her relationship with her girlfriend, up until the night that she's brutally beaten. It's a testament to the writing and the performance that in such a short time, we very quickly learn to know and love these characters. We believe in them and their story, so that what happens to them is incredibly moving and emotionally affecting.

Allison Witham is mostly known for her work in physical theater, particularly with Transatlantic Love Affair, of which she's a company member. She definitely uses those skills here; she's alone on an empty stage with just a chair and a hat, but yet she creates the entire world with specific and precise movements. She plays multiple characters in the story, making them all vocally and physically distinct, and really opens up to some vulnerable moments. Pun intended; the title refers to what the Magician learns from her girlfriend - being open about who she is, and also being open to the experiences of life one can have when being one's full and authentic self. It's a beautiful message.

Open is playing in the Off-Leash Art Box, with the intimate black box space set up as a tiny traditional theater space with risers on one side and the performance space on the other. It's totally unrecognizable from the other shows I've seen there, and well suited to the storytelling since we are at a magic show performance. The lighting (by Tony Stoeri) and sound (by Katharine Horowitz) design and Allison's performance work together seamlessly to create the delightful imaginary magic tricks.

With the continued rise of hate crimes against the LGBTQ community and proposed changes in legislation that threaten civil rights, it's an important time to tell this very real, human, magical, beautiful story of a relationship.