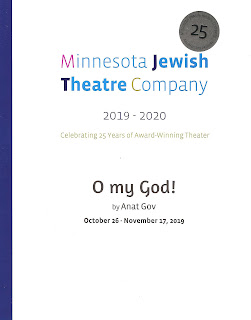 In Minnesota Jewish Theatre Company's 25th Anniversary season, they're bringing us Israeli playwright Anat Gov's O my God!, an imagined therapy session with none other than God himself. As someone who doesn't believe in the God of the Bible, I found it a little hard to connect to, but still an interesting exploration of faith and philosophy. What there's no doubt about is that this excellent three-person cast, under Robert Dorfman's direction, makes the story feel real and grounded, despite the fantastical elements.

Psychologist Ella, single mother to an autistic teenager, is quite surprised when her emergency appointment tells her he's God, and he needs help. Naturally she assumes he's suffering from some serious psychosis and tries to recommend a good psychiatrist who might better be able to treat his disorder. But after G, as we'll call him, proves that he knows more about Ella than any person ever could, and then performs a bit of hocus pocus to pin her to the wall, she believes. What follows is part therapy session and part trial, as Ella questions G about the atrocities of the world, focusing more on the Biblical ones rather than the current day ones. The two don't solve the world's problems, but perhaps have a better understanding of each other and the world.

The play takes place in a sort of garden room in an Israeli suburb, which could be anywhere. Michael Hoover's set makes it look lived in and colorful, with toys and drawings strewn about. Laura Stearns brings such humanity to the role of the harried mother and therapist Ella, that she becomes a real and sympathetic person. James A. Williams portrays God with authority but also vulnerability; to put it simply, J Dub as God is brilliant casting. The play is mostly a two-person conversation, and these two are both really believable and natural in that conversation. In the small but pivotal third role of Ella's autistic son, Sean Carroll is also really believable, portraying young Lior's emotions with nary a word, sometimes just by peaking through the door as his mother talks with this strange man.

O my God! continues through November 17 in the Highland Park neighborhood of St. Paul.