"Fast Company" by Theater Mu at the Guthrie Theater 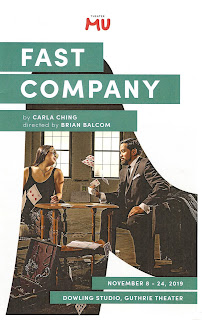 Theater Mu's latest play is a fun crime caper about a Chinese-American family of con artists. Mu was part of the rolling world premiere of NYC-based playwright Carla Ching's smart, funny, two-person relationship play Two Kids that Blow Shit Up a few years ago, and are now bringing us this smart, funny, family crime dramedy Fast Company. There's nothing particularly deep or revelatory about it, but it's fun in an Ocean's Eleven heist kind of way, and it's rare and wonderful to see an Asian-American family at the center of this type of story, portrayed as flawed, messy, loving, complicated humans instead of stereotypes.

Blue, H, and Francis are loving, bickering step-siblings raised by a con artist mother. To test her children to see if they were ready for the crime life, she'd leave them alone in a public place and tell them to find their own way home. When they were 10. Now adults, these kids are tough, smart, and shrewd. Francis is trying to leave the life of crime to be a magician, and Blue is running a complicated con involving a comic book and a couple of double switches. When the valuable stolen comic goes missing, she blames her brother H. They enlist mother Mable to try to get it back, in a complicated series of cons and double cons and triple cons (it's hard to con a con artist). To tell you more would spoil the twists and turns, some of which are foreseeable, some of which are not. But the Kwan family capers take them all over the world, and despite their disagreements, they're still together. The family that cons together...

Director Brian Balcom has assembled a top notch cast that really feels like a dysfunctional family, with prickly chemistry among them. Jeannie Lander embodies the tough but loving mother, balancing the fine line between being a supportive mother and a wily criminal. A relative newcomer to #TCTheater, Ming Montgomery is great as Blue, the sibling with the greatest gift for con. Brian Kim and Eric "Pogi" Sumangil are both fun to watch as the less gifted brothers Francis and H. The ensemble works and plays well together.

The various locations around the world are represented by projections on the cool and modern set. From a swanky office to a dive bar to a park, images projected on the blank blocked walls, plus a few key set pieces, take us there. (Scenic design by Joel Sass, projection design by Miko Simmons.)

Fast Company continues at the Guthrie Dowling Studio through November 24. The Wednesday night performance I attended was sold out, so make your plans soon to see this smart and fun caper of a play.