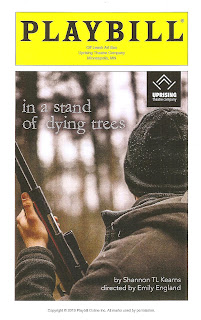 In 2019, Uprising Theatre Company has been presenting plays around one of the most important and controversial issues in our country today - gun violence. The conclusion of this excellent and necessary series is an original play by Artistic Director Shannon TL Kearns. But In a Stand of Dying Trees, playing at Off-Leash Art Box through November 23, is not just a play about gun violence. It's also a play about transgender rights, about the conflict between urban and rural communities, about when to overlook differences in the interest of peaceful coexistence and when to have the uncomfortable conversations. It's not an easy play to watch, and doesn't offer any solutions, but what it does do, what Uprising always does with their work, is open up a conversation. Their community partners for this play are Moms Demand Action, an organization working to end gun violence, and Better Angels, which hosts workshops and conversations to depolarize America. This partnership, along with the discussions that Uprising hosts after every show, make In a Stand of Dying Trees not just a thought-provoking, timely, relevant play, but also, hopefully, a catalyst for real conversation and change.

In the first scene of the play we meet Ben (Jeff Miller) and Amanda (Maretta Zilic), who are enjoying life in the rural small town they moved to five years ago, although Ben more so than Amanda. The seemingly idyllic life, which includes Ben's buddy Joe (Mike Novak) from the factory, is disrupted with the arrival of community organizer Liam (Carey Morton), who has come from the city to help convince people to vote. It's no spoiler to say that Ben is charged with the murder of Joe; it's revealed in the first few minutes of the play. We see Ben on the stand, being questioned about his relationship with Joe, and Liam, and the events leading up to the shooting. We then watch the events play out. We know the sad ending of this tale, the play is about how these characters got to that point of violence, and what, if anything, could have prevented it.

Liam is an out and proud transgender man whom Ben knows from the city, and he's afraid that Liam will spill the secret he's been keeping from the town - he is also transgender. Liam and Ben have some pretty heavy conversations about that, as well as the fact that Ben is a gun owner and hunter. They also get into it with Joe, a "nice guy" whose politics they don't agree with. Matters are further complicated when Liam convinces Amanda to go on strike with her fellow nurses to demand better treatment at the hospital where she works. This seemingly idyllic small town life is a cauldron of tension just waiting to explode.

All of these characters, brought to life with depth and humanity by the cast, feel empathetic at times and frustrating at other times, just like real people. The story plays out in a couple of locations represented by the rustic set (designed by Maggie Mae Sulentic, who also choreographed the realistic fight scenes) - Ben and Amanda's porch, the local bar, and a deer stand / witness stand. Thanks to the script, the performances, and director Emily England, the story feels grounded and real, and the intimate black box space gets us almost uncomfortably close to the tragic events of the play.

Uprising Theatre has been doing some great and important work this year. I admire how they partner with community organizations, host post-show discussions, and otherwise strive for their work to continue beyond just the performance space. I'm looking forward to seeing what they bring us next year. In the meantime, head to Off-Leash Art Box in South Minneapolis to witness theater in action.