"Getting Plowed: A Holiday Survival Guide" at Brave New Workshop 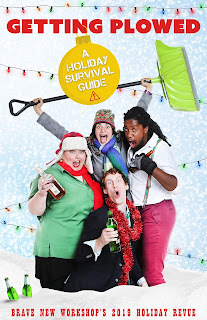 Friends, it's been way too long since I visited the Brave New Workshop, for no other reason than the theater world keeps me so busy I rarely have time to venture over to the adjacent comedy world. But last night I attended opening night of BNW's annual holiday show, Getting Plowed: A Holiday Survival Guide (continuing through January 4), and was reminded of how much fun it is. It's definitely different than the usual theater I attend - more fun and loose and playful - but still with talented and familiar performers who are experts at what they do. Which is write and perform silly, smart, timely, relatable, ridiculous comedy sketches. And this show is all about the holidays, in an irreverent sort of way that celebrates all that we love and hate about this time of year.

I don't know if this was just an opening night thing, but before the show the audience all hung out in the downstairs lobby, with food and drinks available, and then were sent upstairs to the theater after a pre-show speech by the owners John Sweeney and Jenni Lilledahl. On the way to the theater you pass through the "bodega" with more food and drinks available; their motto is "the more you drink the funnier we get," although they were plenty funny on just a hot cocoa (in a real mug!). After settling into our seats around cabaret tables in the cozy and intimate space (so close I could have put my feet up on the stage), Caleb McEwen, BNW's Artistic Director and director of this show, introduced the performers (after paying homage to Dudley Riggs, who founded the company in 1958). And then we were off!

Performers Denzel Belin, Lauren Anderson (in her 16th holiday show at BNW), Taj Ruler, and Tom Reed wrote all of the sketches along with director Caleb McEwan. Many of the sketches also feature music, often spoofs of popular songs, accompanied by Music Director Jon Pumper on keyboard. The dozen or so sketches, performed in just under two hours including an intermission, skewer pop culture, current events, and holiday traditions.

The over-arching theme of using alcohol to get through awkward or tedious holiday gatherings includes stories of an bad break-up between Santa and a child that's forgotten him; adult siblings bonding while hiding out drunk in the basement; the joy and offense of being nominated to be on Queer Eye; Mary as the real reason for the season being mansplained and shut up; Minnesota's favorite shopping locations Target and Ikea; Greta Thunberg's Frosty the Snowman (spoiler alert: it's not jolly); and Disney taking over the world, including Christmas. The show concludes with what has become a beloved tradition at BNW - a rendition of The Twelve Days of Christmas featuring annoying things said by one's parents, neighbors, hipsters, and a dolphin. It's a crowd-pleaser and quite impressive how the performers keep everything straight for 12 verses.

Getting Plowed is a fun alternative holiday* outing that's irreverent and hilarious. The relaxed and festive atmosphere, and talented performers that are having almost as much fun as the audience, virtually guarantee that a good time is had by all.


*This was my first #TCTheater holiday show of the season! I'll be collecting all holiday reviews at this link, so continue to check back for what's playing.