"A Gentleman's Guide to Love and Murder" at Old Log Theatre 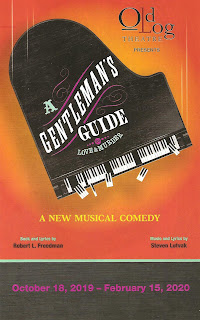 Exciting things are happening in Excelsior. Old Log Theatre (rumored to be the oldest continually operating theater west of the Mississippi) is presenting the regional premiere of the 2014 Tony winning* best musical A Gentleman's Guide to Love and Murder. I saw it last night, about one month into its four-month run, and it's an absolute delight. It's a charming and hilarious big broad English comedy (written by Americans Robert L. Freedman and Steven Lutvak), full of fast clever lyrics, lovely melodies and harmonies, and ridiculously plotted murders, executed brilliantly by the team at Old Log. The only place you can see this recent Tony winner is in the charming lakeside town of Excelsior, that only gets more charming with snow and holiday decorations. This is not a holiday show, but would make for a fun holiday (or post-holiday) outing for friends, family, or solo.

GGLAM (as the cool kids call it) tells the story of likeable English everyman Monty Navarro, who discovers upon his mother's death that he's an heir to the very wealthy D'Ysquith family. The only problem is that there are eight people in the royal line ahead of him. He tries to make nice with the family, but they disowned his mother when she married his father and refuse to acknowledge him. He gently helps along the demise of the other heirs, which is to say he murders them, but somehow in a sweet and unassuming way that leaves you rooting for him. He's also torn between two women. Monty and Sibella seem well-matched, but she marries for money. Monty then meets and falls for Pheobe, his cousin or something (but they're English royalty so that's a plus!). Both women support him as he goes on trial, and he manages to evade the law as he writes the titular guide.**

Director Eric Morris has assembled a fantastically talented cast, and guides them through the broadly comedic tone of the piece for a consistently funny show. What's not to love about Max Wojtanowicz as the charmingly devious serial killer Monty? With his dreamy voice and affable nature, we can't help but root for this murderer. Playing all eight of the D'Ysquith family heirs is David Beukema, making each one distinct. He's always been a great character actor, and it's great fun to watch him play eight specifically eccentric characters, each more delightful, hilarious, and ridiculous than the last. Monty's love interests are pretty dreamy too; Emily Scinto steals scenes and hearts as Sibella, and Elizabeth Hawkinson sings gorgeously as she embodies the more prim and proper Phoebe. These four are surrounded by a talented and hard-working ensemble (Deidre Cochran, Sharayah Lynn Bunce, Gabriel Sell, Suzie Juul, Luke Davidson, and Caleb Michael), playing featured characters and supporting almost all of the musical numbers.

The Old Log stage looks like a lush and slightly faded turn of the (last) century theater, with a shabby chic proscenium and red velvet curtains. Portraits of the eight D'Ysquith heirs are hung on the back wall, and period furniture is briskly brought on and off stage by the ensemble. The featured set piece is a sort of double doors with a curtain, utilized in many ways but most cleverly in the pivotal "I've Decided to Marry You" scene. The cast is dressed in gorgeous period costumes, with lots of quick changes for David. (Scenic design by Erik Paulson, costume design by Samantha Fromm Haddow.)

Music director Bradley Beahen leads the off-stage five-person orchestra in this fast and intricate score, flawlessly performed by the band and cast. Joey Miller's choreography is less big dance numbers and more crisp and precise movements that aid in the storytelling and create interesting tableaux.

A Gentleman's Guide to Love and Murder continues at the Old Log Theatre in Excelsior through February 15. Click here for info and tickets.

*Fun fact: GGLAM was also nominated for best score, but lost to Jason Robert Brown's exquisite The Bridges of Madison County, which will be receiving its regional premiere at Artistry in Bloomington early next year.
**Plot summary borrowed from what I wrote about the Broadway tour a few years ago.