"Beyond the Rainbow: Garland at Carnegie Hall" at History Theatre 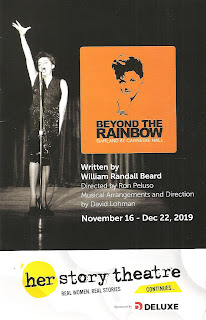 I hope HERstory never ends! After a successful spring of three new works by women about women, HERstory Theatre has continued this fall with the powerful and moving more-than-just-a-play Gloria: A Life (a regional premiere), and now a remount of the History Theatre's original play-with-music Beyond the Rainbow: Garland at Carnegie Hall. This commissioned piece (as many of their work is) premiered in 2005, and has since been produced at regional theaters around the country, including a few return engagements at the History Theatre, most recently in 2011 when I first saw it. Some of the original cast returns, including the incomparable Jody Briskey as Judy, in this story of one of Minnesota's favorite daughters. Everybody loves Judy, especially here in the land of her birth, and this play is a beautiful homage to the human behind the legend, while still celebrating her incredible legacy of music and film.

As the title implies, the show is structured around Judy's iconic 1961 concert at Carnegie Hall, the recording of which won tons of awards (according to the fabulously detailed timeline in the program). Judy (expertly personified by Jody Briskey, who originated the role and has played it numerous times) takes the stage and sings all of her hits, from "When You're Smiling" to "Over the Rainbow" and everything in between, including "Zing! Went the Strings of My Heart," "You Made Me Love You," "Get Happy," and "The Man That Got Away." But this is no mere tribute concert. Each songs triggers memories for Judy of her often troubled life, and then we, and she, watch the scenes play out - some happy, but more often painful. It's as if she's haunted by the ghosts of her past - parents, ex-husbands, studio execs, everyone wanting something from her and wanting her to be and do what they think is best. But despite all the pressures, this concert, and her life's work, was an artistic triumph. Her spirit never faltered, even when her body eventually did; she died just eight years after this highlight of her career, after decades of drug use and mental and physical health problems. This play does not shy away from the hard times, which only makes the celebration of Judy's accomplishments and life that much sweeter.

Playwright Randall Beard and director Ron Peluso have made a few tweaks to this long-running play, most notably the expansion of the number of Judys. Previously played by two actors, this production gives us four different but connected Judys. After so many years with her, Jody Briskey absolutely channels Judy, both vocally and emotionally, as her 39-year-old Judy watches her past play out. All four Judys sound gorgeous, capturing Judy's unique warm vibrato sound. Nicola Wahl is the youngest Judy, the adorable little girl who just wants to make her daddy happy, and is pressured to support the family at much too young an age. As the teenage Judy who becomes a star with The Wizard of Oz, high school senior Lilian Carlson is a revelation, so confident and talented, and I look forward to seeing more from her in the future. Finally, Elena Glass takes us through Judy's 20s and 30s, including her disastrous marriages, her struggles with addiction and mental health, and her personal and professional successes when she learns to stand up for herself. Judy was put through the ringer by those closest to her, and Elena takes us through the full range of emotions. The three past Judys are never far away, often watching from the sidelines, or all interacting as they reminisce. It's a clever device to give us insight into this icon, and works very well in the hands of these four talented actors.

Everyone in the five-person ensemble ably plays multiple roles as they fill out Judy's universe. Three three actors return from the original production, although some in different roles - Cathleen Fuller most notably as a gossip columnist, Norah Long (the original young Judy) as Judy's loving but controlling mother, and Peter Moore as LB Mayer himself. They're joined by two actors who are new to the play - Adam Whisner as husband #3 Sid Luft, alternately supportive and abusive, and Shad Olsen as Judy's father and later her charming (but gay and philandering) second husband Vincente Minnelli.

You can't have a show about Judy Garland without music, and the music here is fantastic. Music Director and arranger David Lohman directs the four-piece orchestra just visible on the side of the stage. The four Judys give you everything you want from a Judy Garland tribute concert - times four!

The set consists of an elegant curved sloping ramp with swooping lights overhead. There's not much in the way of set pieces, allowing the actors and music to create the world of Judy's overlapping memories. The period costumes recreate some of Judy's most iconic looks - a gingham dress, a sparkly black cocktail dress, trim black pants with a bright sequined jacket. (Scenic design by Kate Sutton-Johnson, costume design by E. Amy Hill.)

Beyond the Rainbow: Garland at Carnegie Hall continues at the HERstory Theatre in downtown St. Paul through December 22. Whether you've seen it before or are new to this particular incarnation of Judy's story, it's a wonderful tribute to the legend and the woman.