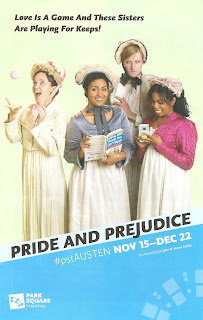 Park Square Theatre recently announced that they're cancelling two planned shows in their 2019-2020 season due to financial challenges. But fortunately, the regional premiere of Kate Hamill's new adaptation of the beloved Jane Austen novel Pride and Prejudice is not one of them. Kate Hamill is a young female playwright who's been adapting several classics with a modern and feminist bent, e.g., Sense and Sensibility, Little Women, and the upcoming Emma, to premiere at the Guthrie next spring. Walking into the theater we're told "this is not your grandmother's Pride and Prejudice," which turned out to be very true. The playwright turns the story into a full-out comedy, performed by an ensemble of just eight actors, many playing multiple roles. While the comedy went a bit too far for my taste in a few places, on the whole it's a fun and delightful new look at a beloved classic.

So here's the thing: I loved about 75% of this show. But the other 25% is a bit too broadly comedic and almost slapsticky for my Austen sensibilities. Now, I'm no Austen purist. I've only read a few of her novels once or twice, I love Kate Hamill's adaptation of Sense and Sensibility, and I adore the Jungle's P&P sequels. But something about the characterization of Bingley as a dog, body parts falling off, and most egregiously the depiction of poor Mary* as a hideous creature who's the butt of everyone's jokes, just didn't work for me. It's a matter of personal taste how one likes to consume one's Austen, and this one went a bit too far.

But enough about that, let's talk about the 75% of the show that I did love. Director Lisa Channer has staged the play in such a way that we get to watch the actors walk on to the taped off square of a performance space in the middle of Park Square's completely bare stage, which really makes it feel like a boxing match, or the game of love and marriage that the sisters refer to. She gets consistently funny and over-the-top performances from the hugely talented eight-person ensemble. When not in the scene, the actors are often sitting on the sidelines, on unused set pieces, watching and waiting for their turn. Or even better, hilariously making off-stage sounds while lounging around. And we get to watch them changing costumes, with help from the hard-working stage hands, and rolling set pieces into and out of the square in character and with fun movement or full-out dance breaks (choreographed by Scott Edward Stafford), accompanied by modern pop and rock music. It's such fun to watch the behind the scenes in addition to what's in the scene.

Everyone in the ensemble is so much fun to watch, playing these familiar yet somewhat modernized characters. China Brickey is everything you want in a Lizzie Bennet - smart and confident, yet awkward and unsure as she navigates the game of love. Sara Richardson is as sweet as Jane should be, with a ridiculously funny turn as Lady Catherine (sometimes switching back and forth in the same scene!). Paul Rutledge is a positively dreamy and awkwardly charming Darcy (and even gets to hilariously reenact that iconic Colin Firth in a wet white shirt moment). Alex Galick is sheer delight both as the harried Mr. Bennet, and as Lizzie's BFF Charlotte, a gender swapped role played not just for laughs but also with humanity. George Keller is outrageously funny as the meddling and scheming Mrs. Bennet (and even gave me a moment, just a moment, of the idea that she was doing this out of love and concern for her daughters), and Kiara Jackson is appropriately flighty and flitting as Lydia. Getting the biggest laughs of the night was Neal Beckman in a trio of roles - the dog Bingley, poor hideous Mary, and Lady Catherine's veiled daughter, displaying his talent at physical comedy. Lastly, McKenna Kelly-Eiding is a treat as cousin Mr. Collins, the dastardly Wickham, and Bingley's snooty sister.

As previously mentioned, the stage is completely bare to the rafters and the back wall, with all of the action occurring within a white outlined square on the floor, unused costumes and set pieces stored in the wings in full (or partial) view of the audience. The charming period costumes (those familiar empire waist gowns and neat suits) are versatile enough to allow for quick changes. (Set design by Annie Katsura Rollins, costume design by Sonya Berlovitz.)

In this review I've used words like hilarious, ridiculous, and outrageous, which doesn't seem quite fitting for Jane Austen. Which maybe is the point, it's just not my favorite Austen interpretation. I'm all for loose and playful, but not outrageous, at least not when it comes to this story and time period. Still, there is a lot to love and enjoy in this production, especially if you're open to the idea of Pride and Prejudice as a broad and outrageous comedy.

*If you want to see Mary as the smart, independent, confident woman she was meant to be, check out the Jungle's remount of Miss Bennet.