"The Penelopiad" by Theatre Unbound at Gremlin Theatre 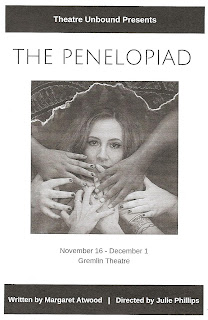 Homer's The Odyssey is one of our oldest stories; Wikipedia tells me it is "the second-oldest extant work of Western literature." But this story, as many old stories do, mostly focuses on the men, with the women as peripheral characters. What if we reimagined this ancient story with women at the center? Author Margaret Atwood did just that in her 2005 novella The Penelopiad, which she later adapted for the stage. It's fascinating and exciting to look at these old familiar stories in new ways, ways that feel more relevant and immediate and rich. Theatre Unbound is presenting this play to begin their 20th anniversary season, and it's a powerful, moving, tragic, and beautiful example of the work they've been doing for 20 years - women telling women's stories.

In The Penelopiad, Penelope tells her own story. In case you've forgotten since you had to read it in high school (which is many years ago for some of us), Penelope is the wife of Odysseus, who left her with their son Telemachus while he went off to fight in the Trojan War for ten years, and then took ten years to return because of all the obstacles he faced on the way home. What we know about Penelope from the old stories is that she remained faithful to her husband (the same can't be said about him) for 20 years and resisted many suitors in the hope that he would one day return, which he eventually did. This play gives us the opportunity to hear Penelope's side of the story.

Penelope tells her story from Hades after her death. Audrey Johnson is captivating as she speaks directly to the audience, looking us in the eye, making us understand and feel for Penelope. She tells us of her childhood (daughter of a naiad and a King), her arranged marriage to Odysseus, for whom she develops genuine feelings, and her long years of waiting. She enlists the help of twelve maidservants in keeping the suitors at bay, which doesn't turn out well for them in the end. They're the other narrators in the story, breaking in and speaking in turns or in unison as they speak their own truths about the way they were (mis)treated.

Julie Phillips directs the talented and diverse all-female cast (which also includes ensemble members Christy Johnson, Danielle Krivinchuk, Emma VanVactor-Lee, Eva Gemlo, Haley Haupt, Kara Haack, Megan Kim, Melissa Miller, Morgen Chang, Rhiannon Fiskradatz, Tia Tanzer, and Wendy Freshman), bringing out all the meaning and lyricism in Atwood's text. The stage is draped with gauzy white curtains, with weaving hung around the space that later functions in the plot. Penelope is dressed in a lovely lavender gown befitting a Greek queen, with a "shimmering robe" for her wedding, while the maids are dressed in identical red hooded tunics (bringing to mind that other popular Atwood story). The ensemble members play many other characters, defined by jackets or different colored dresses. The overall effect is aesthetically pleasing and aids in the storytelling. (Scenic and properties design by Ursula K. Bowden, costume design by Alexandra Gould.)

They play also uses music in a really beautiful and effective way, with original compositions by Rhiannon Fiskradatz, and various stringed instruments played by her and some of the ensemble members. One song, when the women are comforting each other after a particularly vicious attack by the suitors, moved me to tears in the way that it heightened the emotion of the women supporting each other through their darkest times.

The Penelopiad continues through December 1 at Gremlin Theatre in the midway area of St. Paul. If you're not familiar with Unbound's work, this is a wonderful introduction to the important work that they do telling women's stories.