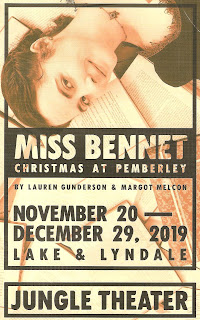 #TCTheater friends, I would like to visit Pemberley every year for the holidays* (or really any time of the year). For the third year in a row, Jungle Theater is presenting their own special brand of Pride and Prejudice fan fiction, in the form of delightfully modern yet still very Austen plays by the playwrighting team of Lauren Gunderson and Margot Melcon. Their 2017 production of Miss Bennet: Christmas at Pemberley was so successful that they co-commissioned a sequel for 2018 - The Wickhams: Christmas at Pemberley. This year they're remounting the 2017 production of Miss Bennet with much of the original team, plus a few delightful new additions. Jane Austen created such a rich world in Pride and Prejudice that I could envision a dozen more sequels, as we continue to visit these four loving but very different sisters in different times in their lives. (Oh wait, there are five sisters; we haven't seen Kitty yet, so she deserves her own sequel next!) This is exactly how I like my Austen - fresh and modern and feminist and charming, but still within the manners of the time. I want to live in that world, but I guess I'll settle for a visit to Pemberley once a year via the Jungle Theater.

Miss Bennet takes place a few years after Pride and Prejudice** ended, leaving eldest sisters Jane and Elizabeth happily married to the Misters Bingley and Darcy, respectively, and younger sister Lydia not so happily married to the scoundrel Wickham (see program for helpful family tree). Kitty, the youngest sister, is in London and absent from the play, leaving bookish middle sister Mary as the heroine of this story. And what a heroine she is. She has grown from the comedic foil of P and P, a girl with her nose always in a book and playing music badly, to a smart, curious, talented woman who knows who she is and what she wants in life, even if that doesn't fit with society's (and her family's) expectations.***

The play takes place over a few days, with the sisters happily reuniting at the Darcys' home, Pemberley, for Christmas. They haven't seen each other in some time, so there is a bit of getting reacquainted. Mary at first feels "invisible" next to the closeness of her elder sisters' bond, but they soon recognize her growth and her worth, and include her in their circle of sisterhood. Even Lydia, as awful as always in her silly, flirtatious ways, has a deeper side that she's hiding, and eventually joins the happy sisterhood. The drama comes in the form of one Lord Arthur de Bourgh, heir to Darcy's recently deceased Aunt Katherine, who comes to Pemberley on route to the estate he has just inherited. It turns out that he loves books and facts and pragmatism as much as our dear Mary, and the two seem perfectly suited for a happy life together. But like any good Jane Austen story, there are a few obstacles in the way of happily ever after, which just makes the getting there that much sweeter.***

Christina Baldwin made her directing debut with Miss Bennet in 2017, and has directed several shows at the Jungle since then, including The Wickhams. To repeat what I wrote about the director two years ago: "her individual talents as a performer in music, comedy, and a poignancy of emotion are evident in the production as a whole. The show strikes the perfect balance between light and funny, and a depth of emotion. Even the scene transitions continue the storytelling, with the servants (played and sung by newcomers Jennifer LeDoux and Abilene Olson, beautiful singers both) busily preparing the estate for the holidays, singing all the while. From start to finish it's a very consistent, polished production."

Half of the original cast returns, including Christian Bardin as the title character, who, if possible, has only gotten better in the role. More comfortable and confident in her choices, even more defined as a character. Christian's portrayal of Mary, as she's written in this play, may be my favorite character in the Austen universe. Also returning are Mrs. and Mr. Darcy - Sun Mee Chomet and James Rodriguez, who also played the roles in The Wickhams last year, and at this point just are the Darcys to me, with their unique relationship of pure love but also still some charming perplexion at their coupling. And once again, Anna Hicky is the epitome of snobbishness in Anne de Bourgh, refined yet hilarious, but the wonderful thing about this play is that even the "villain" gets to have a heart.

New to the show this year is the utterly charming and adorkable Reese Britts as Arthur (he has become One To Watch this year). Reese and Christian are equally matched in their perfect delivery of the delightful and awkward and very nerdy banter that makes this one of my favorite couples in #TCTheater. As the Bingleys, Roshni Desai and Jesse LaVercombe have been promoted from the Downstairs world of The Wickhams (in which they played servants), to the Upstairs world of Pemberley, a worthy promotion. Despite being a recent college graduate, Roshni is quite believable as the eldest sister, with motherly concern, affection, and exasperation for all of her sisters. And Jesse winningly portrays Mr. Bingley's sheer amusement at all that life has to offer. Last but not least, Andrea San Miguel returns to #TCTheater as Kitty, a perfect balance between annoying and darling, as Kitty should be.

Returning set and costume designer Sarah Bahr said that designing a Jane Austen period holiday piece is a designer's dream, and it's also an audience's dream. The Jungle is famous for their brilliant sets in their intimate theater space, that to me are like looking into a perfect little diorama, and this is another one of those. A perfectly charming early 19th Century English estate, piano nook on one side (which Christian does a brilliant job of pretending to play), tiny library on the other. A few stairs up in the back can be seen the newfangled German tradition of a tree (indoors!), that gets increasingly more decorations as the show goes on. The women are dressed in gorgeous empire-waist gowns, the men in tails, with matching coats, hats, gloves, shoes. A dream indeed!***

Head to the Jungle Theater in Uptown to visit this delightfully fresh Austen world, now through December 29. I look forward to the next installment of the series - Kitty, The Forgotten One: Christmas at Pemberley. (That's a joke, obviously, but the possibilities are endless!)

*Click here to read about all of the holiday shows I've seen this year.
**If you need a brush up on the original, check out the new adaptation now playing across the river at Park Square Theatre. But be forewarned - this is not your grandmother's Pride and Prejudice!
**Some text borrowed from what I wrote about the show two years ago.