"The Song of Summer" at Mixed Blood Theatre 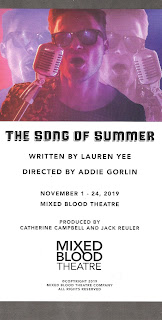 After a pretty intense 2018-2019 season of plays that included Is God Is, the trilogy Prescient Harbingers, Roe, and Autonomy, Mixed Blood Theatre is beginning their 2019-2020 season with something a little lighter. Playwrights' Center Affiliated Writer Lauren Yee (whose work has been seen in #TCTheater most recently in the Guthrie's production of The Great Leap) brings us a sweet and fun play that's almost a rom-com. The Song of Summer is not without substance, dealing with relationships, pop culture, and celebrity, but the story at its heart is one we've seen many times before. But it's told in a unique framework with an appealing cast, so it's a story I'm happy to watch. It's OK for theater to be light and sweet and fun, even at Mixed Blood, especially when this well written, directed, and acted.

Pre-show music sets the scene - a playlist of those ubiquitous pop songs that even people who don't like or listen to pop music (e.g., me) recognize. The show begins with our protagonist Robbie singing one such horribly catchy song, with lyrics that include "girl, I want to empower you to make a bad decision." It's hilariously awful, to the point where Robbie breaks down on stage because everyone hates him and thinks the song is "rapey" - see also "Blurred Lines." Another similarity to that real life song is a pending lawsuit that claims Robbie plagiarized the song from another band.

With all of this building up, plus the tensions of newfound fame, Robbie retreats to the last place he felt safe - the home of his childhood piano teacher Mrs. C in Pottsville PA. There he runs into his childhood best friend Tina, whom he hasn't seen since he was 16. As the two friends-and-maybe-more reconnect, Robbie's manager Joe pressures him to find the tape he made in high school to prove that he wrote this song. This pop star has a serious inferiority complex (don't they all?), but maybe reconnecting with his past will help him find a way forward.

Director Addie Gorlin does a great job with this terrific cast, bringing out all of the humor and heart in the script, and juggling the time shifts well. Dustin Bronson returns to #TCTheater in the role of Robbie, and perfectly captures that mix of pop star swagger and deep insecurity. Chicago based actor Elyse Ahmad (last seen at Mixed Blood in Orange) is a delight as Tina. Both of them play both the adult version of their character and the 16-year old, with a discernible difference. They perfectly embody that phase of life in which you feel awkward in your own body and don't quite know what to do with yourself. The scene of the two 16-year old friends (including the most awkward and uncomfortable love scene in the dark) is the most endearing of the play. Also returning to #TCTheater after too long away is Gavin Lawrence, who's so much fun to watch as manager Joe - a pal but a little bit smarmy as he's mostly concerned about Robbie's career. Maggie Pistner is warm and wonderful as Mrs. C, making it perfectly understandable why Robbie would run to her for comfort.

The entire play takes place in Mrs. C's living room (and a Waffle House), which, as someone behind me said "looks like my mom's basement." Mrs. C is a bit of a hoarder, which comes in handy plot-wise. The back wall of the stage is a wall of shelves overflowing with boxes, toys, and other memorabilia. While you're enjoying (or being annoyed by) the pre-show pop songs, take a look around the stage and see what you can spot, including a Glo Worm, and boxes labeled "stuff." An-Lin Dauber designed this detailed and homey set, as well as the costumes, which range from pop star flashy to working class comfort. The sound design (by Scott Edwards) and lighting design (by Mary Shabatura) help transform the space from present to memory, from big stage to karaoke bar.

It feels like winter, but this sweet, funny, and fun Song of Summer plays through November 24 at Mixed Blood Theatre. It's 90 minutes of joy, laughter, a sweet love story, and real relatable characters. Click here for info and to reserve tickets, or take advantage of Mixed Blood's "Radical Hospitality" program in which available tickets are free beginning two hours prior to the show.