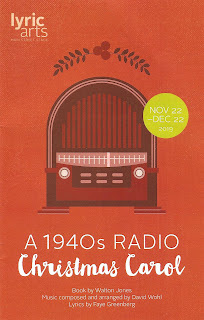 Lyric Arts' contribution to the #TCTheater holiday* season this year is A 1940s Radio Christmas Carol. It's a feel-good nostalgic kind of holiday show, full of laughs, groans, lovely music, and a few poignant moments. You really can't go wrong combining the Dickens classic with 1940s Americana. Lyric Arts has assembled a great cast that performs the material well - both musically and theatrically - with detailed design that'll put you in the holiday spirit.

The play takes place in real time during a live radio broadcast in 1943, at radio station WOV that has recently moved from Manhattan to Newark, which gives the employees a lot to complain about. For this Christmas Eve broadcast, they're performing A Christmas Carol in front of a live studio audience (played by us, the audience). The regular crew is pretty loose and jokey as they prepare for the broadcast, soon joined by acclaimed theater and film actor William St. Claire (Jeffery Goodson). He has brought a large chest of props and costumes (not really required for radio) and has memorized his own version of the script, which the rest of the cast has to struggle to keep up with and work around. When William has a particularly emotional moment thinking of his own son who's "over there" fighting in WWII, he needs to take a moment, and the cast reverts to one of their favorite detective stories. Nazis and the Lindberg baby figure into it (this is the '40s), but eventually they make their way back to the story at hand. The broadcast completed, the cast goes on their way, having shared this experience together.

As part of the show, the radio players sing both traditional Christmas carols (in lovely harmonies) and clever, funny, or sweet new songs (written by creators David Wohl and Faye Greenburg). We also hear ads from sponsors such as Lucky Strike and Ovaltine, and some other old-timey radio sketches. It's a bit of a slow build-up to the main story of A Christmas Carol, but once it gets there it's fun to hear this silly and sweet rendition of this classic.

Director Sean W. Byrd directs the talented cast (although sadly lacking in diversity) through the comic and touching moments, with a sort of loose and playful feel so that this seems like a real group of friendly coworkers. Everyone in the ensemble (which also includes Jacleen Olson, Joe Allen, Kaitlin Dahlquist, Kayli McIntyre, Max Kile, Riley Logan LinDell, Ryan Lee, and Samuel Burnham) plays their part well, and they function well as an ensemble. They also sound pretty dreamy when singing harmonies together (with musical direction by Christopher Stordalen and piano accompaniment by Doug Nelson as "Toots"). Scenic and properties designer Katie Phillips has created a detailed period and holiday radio station, with ads and photos on the wall, and holiday decor scattered around. The cast is dressed in lovely period clothing, complete with hairstyles or wigs that scream 1940s (costume design by Kathleen Martin, hair and wig designer Selena Jackson).

A 1940s Radio Christmas Carol is not anything particularly new or exciting, but if you're looking for a fun and comforting holiday show, full of nostalgia and beautiful holiday music - this just might do the trick.