"Steel Magnolias" at the Guthrie Theater 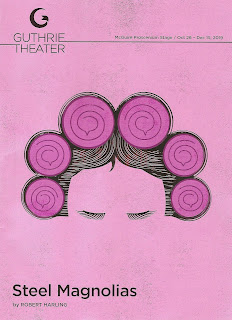 Steel Magnolias is not a new or particularly revolutionary play, but the reason it still resonates 30+ years after its premiere (and the popular 1989 movie adaptation) is that this story of female friendship, and the ways that women come together to support, challenge, and love each other, will never go out of style. Unlike the poofy bangs and high-waisted stone-washed jeans of the '80s. The Guthrie's new production of this late 20th Century classic features a terrific and mostly local all-female cast, plus an all-female creative team, that together bring out all of the "laughter through tears is my favorite emotion" feeling of the play. Steel Magnolias is warm and comforting, familiar and funny, moving and life-affirming.

The play takes place entirely in Truvy's Salon on four Saturday mornings over a couple of years in the late '80s, marked by events in young Shelby's life - the morning of her wedding; the following Christmas when she announces that she is pregnant, which poses a danger to her health; shortly before her mother donates a kidney to her; and (30-year-old spoiler alert!) after her death. The beauty salon is a place where the women gather not just to get their hair done, but also to gossip, needle each other, laugh, and support each other in whatever way is needed. Truvy is the mother hen, and a mentor to new stylist Annelle, who transforms from an insecure abandoned wife, to a party girl, to a born-again Christian, to a wife and mother. Regular customers include the delightfully grumpy and matter-of-fact Ousier and her frenemy, the wealthy and recently widowed Clairee. And then there's Shelby's mother M'Lynn, who would do anything to save her daughter, even while she knows that she can't.*

One of the great things about Steel Magnolias is that it's a true ensemble piece, with each of the six actors carrying equal weight in the humor and pathos of the story. Director Lisa Rothe has assembled a fantastic team and expertly guides them through this tragicomedy. Half of the cast is locally based, and it's great to see familiar faces onstage along side some national talent. #TCTheater veteran Austene Van as Truvy is the heart and soul of the story, and Adelin Phelps (a local actor making her Guthrie debut) brings a quirky and innocent charm to Annelle. As the two stylists, both actors also very convincingly wash, primp, and fuss over the other characters' hair all the while the conversations are going on. Melissa Maxwell (who can also be seen in Minnesota at the Great River Shakespeare Festival in Winona) and Nicole King make a believable mother/daughter team as M'Lynn and Shelby, with a palpable love (and sometimes frustration) between them. Amy Van Nostrand embodies the elegant yet spirited Clairee, and last but not least, Guthrie fave Sally Wingert absolutely cracked me up with her perfectly dry delivery of Ouiser's great one-liners.

The entire play takes place inside the salon, but the Guthrie set (designed by Narelle Sissons) is a little fancier than that. Walking into the proscenium theater, you see the back of Truvy's converted carport salon, with some greenery around and behind it. As the show starts, the salon rotates 180 degrees to reveal the inside of the salon, like a giant doll house. All of the scenes take place within the walls of the salon in the middle of the stage, creating a cozy intimate atmosphere, but with a hint of the world outside as characters come and go and far-off sounds can be heard (sound design by Jane Shaw). Warm lighting represents the changing seasons (designed by Cat Tate Starmer), vintage '80s beauty equipment and decorations fill the space, and characters are dressed in fun and cringey '80s fashions (designed by Kara Harmon). And kudos to the Guthrie wig department, including departing wigmaster Laura Stearns, for this array of '80s wigs that can get wet and be styled live in front of us and still look good. Well, '80s good.

The Guthrie partnered with two local salons, Beauty Lounge Minneapolis and Curl Power Salon (which happens to be the salon I frequent), to study salon culture and lend authenticity to the play. On Monday the 11th the Guthrie, along with these two salons and The Aliveness Project, is hosting a free community event "that explores hair as a historical, cultural and personal-yet-universal human obsession" where they will "set up shop on the Steel Magnolias set with local hair experts and members of the drag community who will share stories, demonstrate techniques and celebrate all things hair and beauty." Click here for more information and to make reservations for this free event.

The funny and familiar tragicomedy Steel Magnolias, a story of female friendship and community love and support, continues through December 15.


*Plot summary borrowed from what I've written about previous productions.