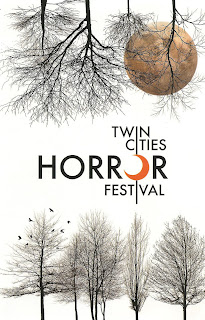 The 8th annual Twin Cities Horror Festival concludes today, and surprisingly this was only my 2nd time attending. Or maybe not surprisingly; unlike my friends at Minnesota Theater Love, who love all things horror and TCHF, horror is not my thing, and Halloween is just another day to go to the theater and an excuse to buy half price candy the next day. But after spending the day at the Southern Theater yesterday, I realized that TCHF is just like a mini Minnesota Fringe Festival (drawing from the same pool of artists, with a similar structure), except that everything is a little spookier. Like Fringe it's a well run festival, but unlike Fringe you don't have to race between venues. You can just park yourself at the Southern for a few hours or a whole day. The festival concludes today with six shows, including two of the below five fantastic shows that I saw yesterday, so use that extra hour you gained to see some fun and spooky theater. 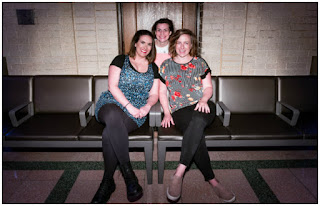 An Improvised Musical Spooktacular by The Shrieking Harpies
I started the day with familiar faces - the delightful musical improv group The Shrieking Harpies, aka Lizzie Gardner, Taj Ruler, and Hannah Wydeven, with Justin Nellis on keys. Like they did in their Fringe show this summer, they create a musical on the fly, which is a pretty impressive feat. The improv trigger was the occult in Bemidji (why not?) which allowed for some local references as well as spooky goings on in the woods. And that swamp deep in the woods of Bemidji. With harmonies and intricate overlapping parts, and a cohesive story involving several sets of characters that come together satisfactorily right on time, it's so good it's hard to believe they're making it up on the spot. 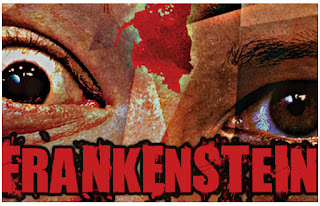 Frankenstein by Dangerous Productions
I had seen this show at Fringe a few years ago, and remember finding it so creepily stunning that I was eager to see it again. Rather than the familiar story of Dr. Frankenstein, it's about a boy named Victor who's obsessed with the book to an unhealthy degree. The story is told in short staccato scenes that jump around in time and space, as Victor begins to experiment like his literary hero. The show brilliantly uses sound and silence, light and darkness, to create an almost unbearable level of tension. The lights go down, leaving us in darkness, and when the lights come up again we, and the actors, are in a totally different place. It's entirely unsettling, in the best way. 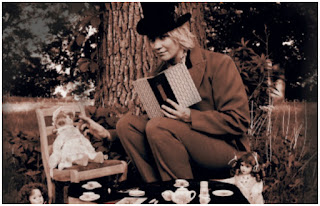 ...And What Alice Found There by The Winding Sheet Outfit
The creators of my favorite 2019 Fringe show here bring us something a little darker, but no less innovative. The subject of Winding Sheet's unique ensemble created story deconstruction is author Lewis Carroll, in particular his questionable friendship with the little girl who inspired his most famous work Alice's Adventures in Wonderland (see also the play Peter and Alice). Kristina Fjellman is Lewis, Megan Campbell Lagas is Alice, and the five other ensemble members, dressed in innocent white old-timey nightgown-like dresses, play all of the other characters. There's not much that's creepier than children chanting and moving in unison, and they make good use of that here, along with shadow puppetry, singing in dissonance, and physical theater elements to hauntingly tell this story behind the beloved children's story we think we know. 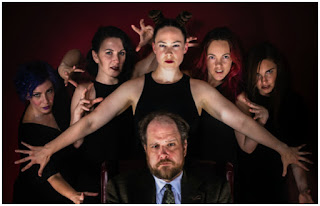 Feminine Inhuman by Erin Sheppard Presents and Reverend Matt's Monster Science
As Amber Bjork said after her show (see above), these are "two great tastes that taste great together." You wouldn't think that they would, but somehow it works, and beautifully, as they explore the female side of monster mythology. Which there isn't a lot of, because patriarchy, but we do learn a bit about the origin of mythical creatures like Banshees and Harpies. Reverend Matt does his usual schtick, which is a thoroughly researched deep dive into mythology, legends, cultures, history, and sociology, delivered with wry humor. Added to that is Erin Sheppard’s theatrical dance that so beautifully and effectively tells a story solely with movement. The result is really effective, educational, funny, moving, and thrilling to watch. I kinda missed Rev Matt's usual Power Point illustrations, but the human illustrations almost made up for it. Final performance today at 5:30. 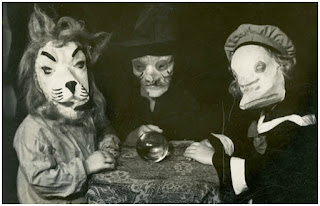 The Rule of Three by Four Humors
Three very different stories make up this hour long exploration of the things that terrify us (and make us laugh), written by Matt Spring and performed by Ryan Lear, Brant Miller, and Matt Spring. Act I is a futuristic story of real live "deepfakes" - clones that take over people's lives. In a world where it's getting harder and harder to believe that what you see is true, it's a little too scary. Act II "direct to video" is a short film about a man trying out for a spooky story club by telling a spooky story that's more funny than spooky. Act III tells the story of a 19th century expedition to the West that goes horribly, horribly wrong, told in a non-linear fashion. All three tales feature a really excellent and effective use of video and projections, and showcase three different but equally brilliant styles of storytelling. Final performance today at 2:30.