"what if" by the Moving Company at the Lab Theater 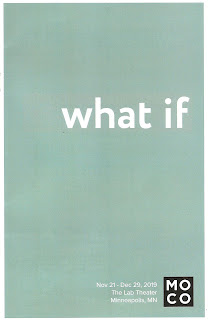 The Moving Company's latest original work what if is made up of two separate and very different parts that together form a "moving," "funny," "thought-provoking" piece of theater. I use quotes because in this sort of meta, fourth wall breaking piece, the performers talk about theater, and how we talk about theater, and say just about every world I've ever used to write about theater. It's sort of about theater itself, why we do theater, why we go to the theater. And it's also about humanity, and the origins of storytelling, and the what if of imagining ourselves in someone else's shoes - both as performers and as audience members. It's a process of creating empathy, of making this very big world seems smaller, or more familiar, or more connected. Forgive me if I'm not making sense, or talking in circles, but such is this piece of new and original theater.

The program gives a bit of a clue, or guideline, providing some background about the roles of the Messenger and the Buffoon in theater. Part One of what if features the Messenger, "a character that arrives bearing news of the world, like a warning." This comes in the form of actor/creator Steven Epp, speaking directly to the audience, and then imagining himself as a Syrian Jew who has fled to Paris after surviving years of war in Aleppo, who then imagines himself as an 11-year girl floating on a roof in a flood in Nebraska. These two very different stories indirectly convey a warning about our world, connected by a murmuration of starlings. Steven Epp beautifully portrays both of these very different but connected humans, allowing us to imagine "what if."

Part Two brings us the comic relief of the Buffoons (aka the very funny Sarah Agnew and Nathan Keepers, both of whom also co-wrote the piece with director Dominique Serrand). But their message is no less dire, just delivered in a more light-hearted way. Dressed alike in a white tank top, grey jeans, and black shoes, with a cropped black hoodie used to create different characters (costumes by Sonya Berlovitz), these two take us through the story of everything. The origins of humans, the origins of God, the origins of humor - these two Buffoons convey it all, moving and speaking almost as one. Then they connect with Part One again, bringing us full circle back to the beginning.

The two parts, each just under an hour long, are connected in their use of Shakespeare, familiar quotes from Hamlet, Romeo and Juliet, Macbeth, and more. For whatever reason, old Will was able to capture our shared humanity in a way that has withstood centuries of change, which perhaps is why our Messenger and Buffoons use this common language. Both pieces are performed on a bare stage against the gorgeous backdrop of the Lab Theater. Part One with set/props consisting of a saucepan, blanket, and blue plastic crate (riddle that one), Part Two with even fewer props, just an occasional water bottle or bucket brought out momentarily. It's really up to the three performers who physically and with text create these worlds and these stories in a captivating, engrossing, and entertaining way.

what if officially opens this post-Thanksgiving weekend, and runs through the end of December. It's the sort of "thoughtful," "imaginative," "unique," and "meaningful" work I've come to expect from the Moving Company, and truly encompasses everything from the ridiculous to the profound.