"All Is Calm" by Theater Latte Da at the Ritz Theater 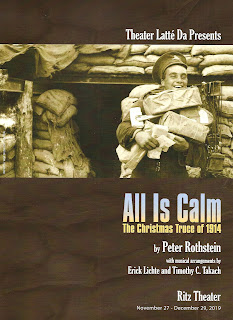 I saw the movie A Beautiful Day in the Neighborhood yesterday, about how one person's life was changed by meeting Mister Rogers, the legendary children's show host who touched, and continues to touch, so many lives. It reminded me of the good in humanity, and that we all need to, and are perfectly capable of, doing better. What does this have to do with Theater Latte Da's Drama-Desk-Award-winning soon-to-be-PBS-broadcast original holiday piece All is Calm? Like Mister Rogers, this artfully constructed story of the real life WWI Christmas Truce reminds us what can happen when we choose kindness over violence, connection over hate. The soldiers were only able to accomplish this remarkable feat for 24 hours, and then the war continued for several years and millions of deaths. But if a war can cease even for 24 hours, if a man can heal his relationship with his father thanks to one person's kindness and encouragement, what else can we accomplish, individually and collectively, if we choose kindness, connection, and peace? This is the seventh time I've seen All is Calm, my favorite of what the #TCTheater holiday* season has to offer, and it only gets more beautiful, poignant, and necessary every year. We need this message now more than ever.

In just over an hour, this cast of ten men, all beautiful vocalists and actors, tells the story of the Christmas Truce of 1914. Created by Latte Da's Artistic Director Peter Rothstein, the show takes us from the soldier's excitement at going off to war and having adventures, to the realization that war is truly awful, to that one day of peace they found in the trenches, when both sides put down their weapons and celebrated their common humanity.**

The story is told continuously with no applause breaks, just song into text (letters, articles, poems, and other historical documents) and back to song again. The chorus cast sings a capella the gorgeous arrangements by Erick Lichte and Timothy C. Takach. Each one of them (Andrew Hey, Andrew Wilkowske, Ben Johnson, Benjamin Dutcher, Evan Tyler Wilson, James Ramlet, Riley McNutt, Rodolfo Nieto, Paul R. Coate, and Sasha Andreev) has an incredible voice individually, and combined together they make a truly beautiful and stirring sound singing songs of the period, both Christmas carols and war songs. They read the words of real soldiers in a delightful plethora of British accents, as well as a few German (dialect coach Keely Wolter), followed by the name and regiment of the author, which brings history to life in a personal and poignant way.**

The staging is minimal, with just a few crates to create some visual interest, and subtle lighting changes to help create the mood (designed by Marcus Dilliard). Real WWI soldiers wish they were dressed as well as this cast, in Trevor Bowen's chic array of layered black sweaters, coats, hats, gloves, scarves, and kilts. Everything about the show is thoughtful, simple, effective, and perfect.**

Last year, Theater Latte Da took All is Calm to a theater Off-Broadway, where it won a Drama Desk Award for Unique Theatrical Experience. In a few weeks, PBS will record a performance for national broadcast next year. This year's month-long run at the Ritz in Northeast Minneapolis is already approaching sell-out. Obviously, this is a message we all long to hear. All is Calm shows us the absolute horrors of war and violence, and that we can and must find different ways to resolve our differences. Whether those differences are between countries, between political rivals, or between an estranged father and son. We can do better. We can choose peace, like the men honored and remembered in All is Calm did.


*Click here to read about all of the holiday shows I've seen this year.
**Some text borrowed from what I wrote about last year's show.