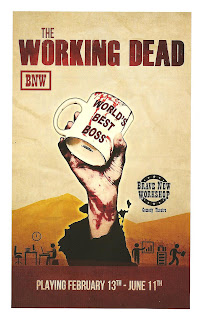 There's a reason workplace comedies are so popular and strike such a chord with so many people. The situation of forced pseudo-friendship that many of us find ourselves in on a daily basis is ripe for comedy. We form this strange little society with its own rules and language. No wonder Brave New Workshop chose it as their new show, entitled The Working Dead. Don't we all become zombies a little bit when we go into the office? Director Caleb McEwen notes in the program (or bulletin as I overheard someone calling it): "We spend most of our time around a group of people with whom we did not necessarily chose to fraternize, and these accidental friends will provide the bulk of our adult interactions. These are the people that will shape how we view and interact with the world around us." But this sounds a little too serious for what is a hilariously fun sketch comedy touching upon nearly every workplace issue, from casual Friday to personality tests to teambuilding to office romances. With over 50 years of history, BNW is like Minnesota's SNL, and I'm embarrassed it took me so long to get there. This might have been my first visit to Brave New Workshop, but it most certainly will not be my last.

This terrific six-person cast (Lauren Anderson, Ryan Nelson, Nissa Nordland, Kory Pullam, Tom Reed, and Taj Ruler) wrote and performs over 20 sketches, all centered around the workplace theme. While there aren't as many references to one of my favorite TV shows The Walking Dead (which I'll be watching tonight, the Oscars can wait, but Rick and Co. cannot!) as I expected, there are plenty of TV and pop culture references to keep me happy. There's also not as much political humor as I expected, except the occasional dig at Trump, but that may change over the four-month run of the show. While I hadn't been to a BNW show before, I have been in their theater on Hennepin Avenue a few times. It's a nice intimate space with cabaret tables in front and a few rows of seating in back, with a ledge upon which you can set your drink. And with plentiful bars that seems to be part of the experience (ask for half-off drink specials with alternate transportation). As they say, "the more you drink the funnier we get!"

Without giving away too many punch lines, here are a few of my favorite moments from the under two hour show (including intermission): 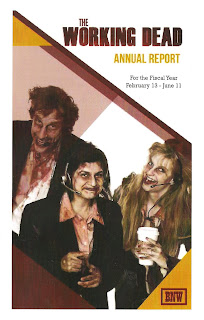 I don't think anyone needs me to tell them that Brave New Workshop does great, smart, funny work, their record has proven that. But I will tell you that The Working Dead is a hilarious good time, and sketch comedy is a nice change of pace from the usual theater fare. This one's playing through June 11, so head downtown and be prepared to laugh!