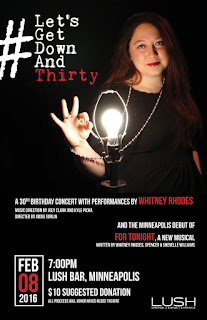 One of the very first things that I wrote about when I started Cherry and Spoon back in the summer of 2010 was a very fun and entertaining cabaret/comedy show called Where's My Tony?, created, written, and hosted by Whitney Rhodes and Josh Campbell. I've enjoyed watching both of them over the last five and a half years wherever their careers took them, and I was thrilled to watch Whitney host a show of her own this past Monday. Every year, she very generously uses her birthday celebration to raise money for a cause she cares about. This year for her 30th birthday, the money raised went to Mixed Blood Theatre, where she currently works as the Development Manager. Mixed Blood is celebrating their 40th birthday this year, so it seems quite appropriate to celebrate these two milestones with a great evening of beloved and new musical theater.

Whitney got her birthday bash off to a great start by singing a few of her favorite musical theater songs, accompanied by Joey Clark on the piano. Some from shows she's been in, some from shows she'd like to be in, all from shows I'd love to see her in! From Into the Woods to Kinky Boots, with a few original songs (or at least lyrics) thrown in to make this a very personal and entertaining show. Joining her on a few duets were her talented friends Eric Morris and Max Wojtanowicz. What a wonderful way to celebrate a birthday and a beloved Minneapolis theater!

In addition to her talents as a performer and director, Whitney also recently wrote a musical with her friends Shenelle and Spencer Williams. For Tonight has been in a few musical theater festivals around the country, but has yet to be seen in the Twin Cities. Eric, Max, and more of Whitney's talented friends (including Tim Hausmann, Britta Ollman, Sheena Janson, and Kyle Picha as Music Director) participated in a reading of the first act of the musical. Based on a family story about Spencer's ancestors, For Tonight takes place in mid-19th century Wales and Liverpool, told through a score that's described as "indie-rock/folk." The score is fantastic, the story is compelling, and I was left hanging at the end of Act I, wondering where these characters will go in Act II. It's hard to get a sense of time and place in a reading, but I trust the Welsh-ness of the story will come out in a full production with sets and costumes (and possibly accents?). I'm hoping we'll be able to see it here in the not too distant future (calling Theater Latte Da and their NEXT 20/20 program!).

I'm continually amazed at the talent in this town, especially at fun informal events like this. Thanks to Whitney Rhodes for sharing her talents, her talented friends, and her birthday celebration with us. I'm looking forward to what she will accomplish in her 30s!