"Silence! The Musical" by Minneapolis Musical Theatre and Bitter Boy Productions at the Lab Theater 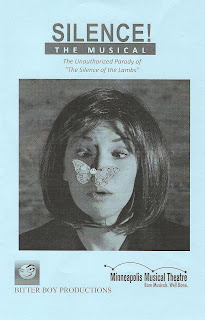 A musical about silence? That seems paradoxical. But of course Silence! The Musical is not about silence itself, it's a parody of the 1991 Jodie Foster/Anthony Hopkins movie The Silence of the Lambs. A movie I've never seen. My friends at Minnesota Theater Love told me I should see the movie before seeing Minneapolis Musical Theatre's production of the off-Broadway musical, but I didn't have time, because... theater. Also I decided that the musical should be able to stand on its own; you shouldn't have to see a movie first to enjoy a musical. And for the most part the musical does stand on it's own, aided by the fact that the movie is so much a part of our pop culture that even I'm familiar with Hannibal the cannibal and the weird teeth-sucking sound he makes, along with a few other high points of the movie. Although this over-the-top campy horror-parody isn't really my kind of humor, I can appreciate that director Steven Meerdink and his talented cast commit fully to it and deliver an entertaining show.

If you want to read a review from someone who knows and loves the movie, read Minnesota Theater Love's review. I'm certain I missed most of the references to the movie, but I could still follow the story, or this absurd version of it anyway. The ten-person cast nails the impersonations of the movie characters (what I know of them anyway). Emily Jabas is Jodie Foster as Clarice, and she not only speaks in a Jodie Foster voice, but she also sings as Jodie Foster, no easy task! Tim Kuehl has Anthony Hopkins' creepy cool demeanor as Hannibal Lector, delivering one particularly foul song with utter sincerity, making it even more ridiculous (in a good way). Other highlights in the cast are Ryan London Levin is the other scary serial killer, Marlin Rothe as Clarice's boss and dead papa, Jordan Oxborough as the smarmy doctor, and Amanda Weis as a kidnapping victim and her mother, allowing her to use her lovely soprano to comedic effect. Several of these actors join the rest of the ensemble in the chorus of singing lambs, which is as weird and wonderful as it sounds.

The songs are equal opportunity offensive, in the way that satire can be. But they're also kinda catchy, with the cast well supported by a four-piece band led by Matthew Bear, most of whom were unfortunately hidden behind a curtain. The actors are miked, which doesn't seem necessary in the Lab space, especially for the spoken parts. Having actors speaking dialogue into mics that are a little too loud when they're standing ten feet in front of you is a little off-putting. But the space sure looks cool, with two multiple story wooden structures upon which is hung every conceivable creepy looking doll or tchotchke. The space and structures are well-utilized, especially in creating a well-like effect (set design by Darren Hensel).

I admire a show that knows what it is and doesn't try to be anything else. Silence! The Musical is fun, clever, and campy, and even pokes fun at itself. Minneapolis Musical Theatre's motto is "rare musicals, well done." Mission accomplished on both counts! Silence! The Musical continues through March 6 at the Lab Theater in Minneapolis' North Loop neighborhood (discount tickets available on Goldstar).