"Eye of the Lamb" by Workhaus Collective at the Playwright's Center 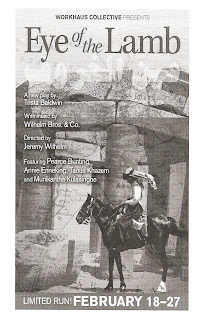 How have I never heard of Gertrude Bell? She sounds like my kind of woman. Born in 1868 to a wealthy British family, her life sounds like one constant stream of adventures. She was a writer, explorer, mountaineer, archaeologist, and politician in an era when few women were given the opportunity to do any of those things, much less all of them. Of course she wasn't just an admirable heroine; history is rarely that cut and dried. She was also heavily involved with Britain's colonization of Arabia and helped to draw the borders of modern Iraq, for better or worse. But according to Wikipedia, she was "one of the few representatives of His Majesty's Government remembered by the Arabs with anything resembling affection." That's something, I guess. Her life would make one epic play, which is perhaps why playwright Trista Baldwin decided to focus on a few years at the end of her life, when she's serving as Oriental Secretary, i.e., a liaison between the British and Iraqi governments. Of ill health, she begins to gather her writings together, and the reminiscing provides a portrait of a life. Aided by live music and excellent performances by Annie Enneking and the rest of the cast, Eye of the Lamb is a fascinating play about a remarkable woman who should be remembered.

The play is written largely as a monologue, with Gertrude (Annie Enneking) speaking directly to the audience as confidants. This immediately draws us into her story and wins us to her side. We also see her interacting with her faithful French maid Maria (Taous Khazem), two very different British officers (Pearce Bunting), her guide Fattuh, and friend King Faisal (both played by Munikantha Kulasinghe, who also sits in with the band). As Gertrude and Maria sift through her writings, she shares with us various stories of her past, including losing a man she loved in the war and some of her harrowing adventures. This play doesn't tell the whole story of Gertrude's life, rather it paints a portrait through anecdotes, interactions, and experiences. It's a lovely overview that makes me want to find out more about her. Fortunately a handy timeline is provided that fills in some of the facts of her life and places the play into context.

Annie is just wonderful as Gertrude, with a prim British accent and a pile of hair on her head sometimes covered with a hat, almost like Mary Poppins gone to Arabia. She's strong and determined, but with a hint of uncertainty as the end of her life approaches and she struggles to define her "Personhood." In this portrayal Gertrude is most certainly a woman to be admired.

Before the show and as part of the show, the audience is treated to live music authentic to the period and location. Don't ask me to describe it, but it's fun and lively, as it presents a nostalgic romanticized picture of "Araby." And I think I recognized this song, although the lyrics I remember from my childhood are probably not the correct translation of the original.

The bare stage at the Playwright's Center is populated with a few rugs and pillows (including some in front of the audience that I considered sitting on for a moment) and one versatile set piece - a wardrobe that can be moved around and tipped over to represent a number of different objects and settings (no set designer listed so I will credit prop designer Sarah Salisbury).

I'm fairly new to Workhaus Collective. They've been around for ten years but this is only the third work of theirs I've seen. I did not realize until last night that Workhaus is a Collective of playwrights who take turns in serving as the Artistic Director when their play is being produced. It's a unique structure, and one that seems to work well. Eye of the Lamb is a compelling and engaging new play about a fascinating woman, continuing through this weekend only so get there soon!