"Newsies" on tour at the Orpheum Theatre 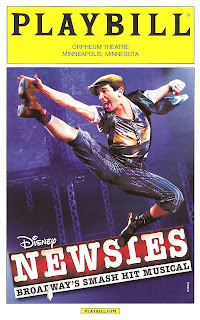 I'm just a little bit too old to be among the ranks of teenage girls that fell in love with the 1992 Disney movie musical Newsies. Loosely based on the historical newsboys strike of 1899, the movie starred a young Christian Bale and was a flop at the box office, but found success among said teenage girls through the burgeoning home video market. So it seems inevitable that Disney would capitalize on this popularity by bringing the movie musical to the stage, as they did with the 2012 Broadway hit that ran for four years and launched a tour that is finally landing in Minneapolis this week. While it's very much a Disney production and I'm still a little too old to completely fall in love with it, I thoroughly enjoyed Newsies because of the fantastic dancing by a huge cast of charismatic young men (this is not a show that employs a lot of women), impressive set, rousing songs, and charming performances by all. But it's only here for a week, so embrace your inner teenage girl and head on down to the Orpheum Theatre.*

Newsies is part Oliver! (orphan boys living on the street), part West Side Story (street fighting/dancing), part Annie (a love of NYC and an appearance by a Roosevelt), and even part RENT (dreaming of leaving NYC for Santa Fe, hanging out at a cafe where they can't afford to buy anything). And it's also all Disney, i.e., predictably pleasant. Of course the charming young hero Jack and his band of boys are going to succeed in overthrowing media giants Joseph Pulitzer and William Randolph Hearst, with the help of Governor Teddy Roosevelt, natch. And of course Jack is going to fall in love with the plucky reporter (is there any other kind?) Katherine. But it's all quite fun, and as I said in last night's #intermissiontweets: I'm never mad at a stage full of cute boys dancing!

Newsies continues through this weekend only at the Orpheum Theatre in downtown Minneapolis.

*Be sure to allow extra time to proceed through the security check which is now standard at all Hennpein Theatre Trust theaters (Orpheum, State, Pantages, and possibly New Century - I'll let you know).
**Speaking of Alan Menken, have you seen the TV musical comedy Galavant, for which he wrote the music?  It just completed its second season of eight half-hour episodes on ABC and is must-see viewing for all musical theater nerds. It's a cross between Spamalot and The Princess Bride, with a wacky charm all its own.