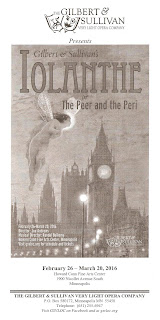 Did you know there's a company in town entirely dedicated to the works of music-comedy geniuses Gilbert and Sullivan? Neither did I, until last year about this time, when I "discovered" the 30-year-old Gilbert and Sullivan Very Light Opera Company through their marvelous production of H.M.S. Pinafore. They followed that up last year with the one-act Trial by Jury at the Minnesota Fringe Festival, where it was one of the top-selling shows. While they may be new to me, they obviously have a very loyal audience, and deservedly so. If you're among that audience, you don't need me to tell you what a wonderful job they do. If you're not, and you're a fan of Gilbert and Sullivan's particular brand of witty, clever, rhythmic comic opera, you might want to check out their latest production. This year they're presenting the lesser known (to me anyway) Iolanthe; or, The Peer and the Peri. And it is, once again, a delightful production of a very funny farce/fantasy/ political satire, beautifully performed by a cast of over 40 and a backstage orchestra nearly as large. GSVLOC fills a unique and specific niche in our rich Twin Cities theater community, one that I'm delighted to have "discovered."

Who or what, you might ask, is Iolanthe? The second part of the title, which G&S were so fond of, gives us a clue. Peer refers to the House of Peers, a body in the British government, and Peri is another name for fairy. Basically this is a story of what happens when fairies and governmental officials meet. You'd be hard pressed to find two more different groups than the stiff pompous Lords and the nature-loving immortal fairies, which sets up many comic situations. Iolanthe is a fairy who has been banished from the fairy world for marrying a mortal, and is summoned back 25 years later to the delight of her fairy sisters. Her half-fairy son Strephon (the upper half, if you're wondering) is a happy shepherd about to marry his love despite the fact that the Lord Chancellor has not approved. They're briefly torn apart when she sees him with his mother who, being a fairy, looks younger than him. She agrees to marry one of the Lords (it doesn't matter which), and the Fairy Queen punishes them by making Strephon a member of the House of Peers. In typical G&S fashion, secrets of birth are revealed, and things end happily in a wedding. A silly story, yes, but with lots of commentary about the British government that strikes a little too close to home with some of the ridiculous things going on in our government right now!

While I love a sparse, pared down musical, there's something about watching and listening to a huge cast and orchestra that is such a musical thrill! Music Director and Conductor Randal A Buikema leads his company well as they create a lush, full sound on this intricate G&S score. The beautiful opening overture almost makes one want to close one's eyes and just listen, except then you would miss the lovely play of color on the charming painted set (lighting design by Jon Brophy, set design by Larry Rostad). The musical delights only continue from there as the cast joins in, so many that they barely all fit on the sloped stage!

With few exceptions this cast is mostly unknown to me, and mostly made up of volunteers, all of whom perform with great enthusiasm. Highlights include Lara Trujillo in the title role, the powerfully-voiced Deborah Haas as the fairy queen, Scott Benson as the stern Lord Chancellor, the charming Eric Sargent as Strephon, and Sarah Wind Richens as his love Phyllis, with a lovely voice and great comedic timing. Aside from individual performances, it's the group numbers that really shine, both the sweet and graceful fairies "tripping hither and thither," and the pompous Lords prancing about "dignified and stately." Speaking of tripping and prancing, Linda Talcott Lee's choreography is simple and quite doable even for dance novices, but is charming and appropriate and really quite fun to watch.

Iolanthe is simply delightful, well performed by an enthusiastic crowd of actors, singers, and musicians. If you enjoyed the Ordway's Pirates of Penzance last summer, or the Guthrie's H.M.S. Pinafore a few summers ago, check out Gilbert and Sullivan Very Light Opera Company. After 30 years they know what they're doing. Which is bringing joyous life to these fun, silly, and satirical comic operas (continuing weekends through March 20).