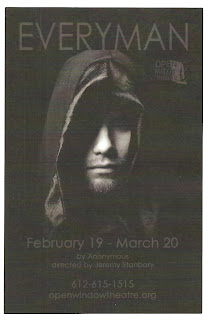 The last time I was at Open Window Theatre, tucked into a warehouse behind the Basilica in Minneapolis, was in their inaugural season. They are now in their fifth season and appear to be going strong. I was glad to finally return to their cool and cozy black box space for Everyman, a 15th century morality play. While the five hundred year old play is a little heavy handed in its moral message, this 90-minute production directed by Jeremy Stanbary utilizes music, movement, and a beautifully diverse cast to make that message feel relevant and almost modern.

The hero of this story is named Everyman, and is played by five actors of different gender and race. I commend them for this choice because it truly feels like Everyman does represent us all. As we progress through the story of Everyman being visited by death, preparing to make the journey, and trying to improve him/herself before the end, one actor passes on the mantle (literally and figuratively) to the next. The character is represented by a scarf, slowly changing from white and crisp to dirty and ragged, and back again. Everyman is accompanied on his journey by Beauty, Strength, Wits, Knowledge, and Good Deeds, with only the latter remaining with him to the end. 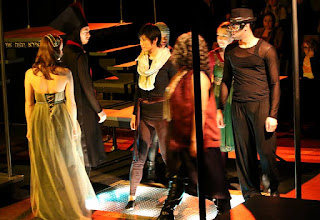 The 15th century English language, similar to Shakespeare, takes a minute to get used to, but the eight-person cast performs with great expression so it soon feels nature. The five actors playing Everyman (Corey Mills, Nicole Goeden, Kiara Jackson, Elohim Peña, and Joann Oudekerk) all bring out different aspects of the character. Along with Sharayah Bunce, Siddeeqah Shabazz, and Nathan Gebhard, they all play multiple characters, and truly feel like an ensemble. The movement, especially in the transitions, is beautiful (choreographed by SPARK theater + dance, of which Corey is a co-founder). The costumes range from purposefully plain (all black for the Everymans) to beautiful (the mask of death) to ridiculous (the most obvious pimp costume you've ever seen). The stark set with many steps and levels provides a great jungle gym for the actors to climb on and around (costume design by Josette Elstad, set design by Justin Barisonek).

One really cool, beautiful, and important part of this piece is the music by Kurt Larson. Unfortunately he's stuck up in the rafters in the tech area and can't really be seen. There's a lot of interesting sounds coming from him, and I wish he had been located on or near the stage so that I could see what he was doing and what instruments were making the sounds. 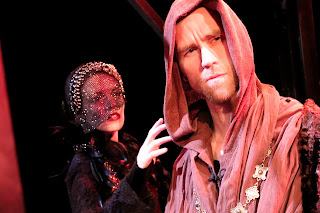 The play is not very subtle in its message of salvation through good works, but the Catholic Church has never been known for its subtlety. At times I felt like I was in religion class (they even listed the seven sacraments). But of all the teachings of the Catholic Church, the idea of doing good and helping our fellow residents of this planet, no matter their color, creed, gender, class, or circumstance, is perhaps the best of them. This production presents this ancient message it in a cool, modern, and innovative way.