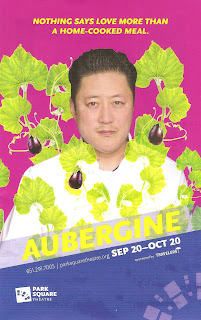 Food is life. Literally, we need it to survive. But food also sustains us in other ways. It's a way to express love, it's ever present at family and community gatherings, it's intrinsically linked to our memories, we commune with our fellow human beings over a shared meal. Playwright Julia Cho (whose work was last seen at Park Square in 2015's The Language Archive) has taken this universal human theme and written a beautiful play that tells the specific story of a Korean American chef and his dying father. For Aubergine (another world for eggplant) is not just about food (life), it's also about death. You can't have one without the other, something this play understands very well, and something the characters learn to understand. In his second season as Park Square's Artistic Director, Flordelino Lagundino makes his directing debut here, creating a piece of theater that engenders the full scale of emotion from the audience, from laughter to tears. It's a beautifully and devastatingly human experience.

The play begins with a monologue from Shanan Custer, who plays several characters in the play. When this #TCTheater favorite, who usually makes me laugh, made me cry at this character's food memory about her dad, I knew what kind of a play I was in for. This food memory theme continues, with almost all of the characters having a moment to tell a story of a food experience that meant a lot to them. Which, of course, isn't about the food itself, but about the situation and people surrounding that food experience. Whether it's about a refugee camp, or a parent obsessed with cooking for and feeding her children, or a packet of ramen.

In between the stories of food memories is the main story, that of Ray and his father, who is dying of cirrhosis. They begin hospice care at his home, with Ray and hospice nurse Lucien taking care of the very sick man who has fewer and fewer moments of awareness. Out of desperation, Ray enlists the help of his ex Cornelia, a better Korean speaker than he is, to call his uncle in Korea. He soon turns up at the house, with a recipe for turtle soup and plenty of stories. He convinces Ray to make this soup for his father, not wanting his last meal to be the Ensure that the hospital sent home. The problem is that Ray's dad has never liked his cooking, in fact has never seemed to enjoy eating at all. But they're not really making the soup for him to eat, it's a ritual of honoring his life and saying goodbye.

This excellent cast is led by Kurt Kwan as Ray. I've long been a fan of Kurt's, but I'm not sure I've seen him give a better performance. There's no artifice here, no "Acting," just pure raw genuine emotion. He hits all of the notes of Ray's journey in a really heart-breaking, beautiful, authentic way. Sun Mee Chomet is great, as always, as Cornelia, and sounds like a natural speaking Korean even though she learned it for this role. Glenn Kubota spends most of the play lying in bed, but makes an impression in his few speaking scenes, flashbacks that inform the father/son relationship. As Ray's uncle, Song Kim only speaks Korean (sometimes translated with surtitles), but still manages to convey all of the emotion even to those who don't understand the words. Rounding out the cast is Darrick Mosley, with a lovely performance as the kindest hospice nurse.

The play is performed in Park Square's basement thrust stage, with a simple backdrop of white curtains and blinds, upon which projections are sparingly used to convey memories. The sparse simple set pieces include a hospital bed, kitchen counter, and table with chairs, which keeps the focus on the story and the characters, who are dressed in modern character defining clothes. (Set design by Deb O, video design by Kathy Maxwell, costume design by Amber Brown.)

Aubergine is not the easiest play to watch and will surely bring out many different emotions from the audience as we watch Ray come to terms with his father's mortality, and his own. Something all of us have to do sooner or later. But it's the best kind of play, one that deftly depicts the human experience with grace, humor, and heart.