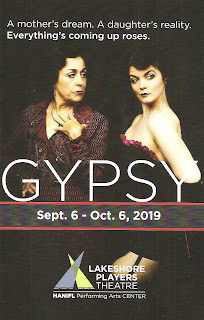 Lakeshore Players Theatre opens their second full season in their gorgeous new home in White Bear Lake, the Hanifl Performing Arts Center, with the classic musical Gypsy. As someone who lives in the Northeast Metro, it's such a treat to be able to see great theater without having to drive into the city and deal with construction, traffic, crowds, and parking. I'm lucky to be so close to LPT, and since Gypsy is one of my faves (I've seen it six times now) and this cast is so great, it was a lovely Friday evening enjoying theater in the 'burbs.

In case you've never seen Gypsy, based on the memoir of real life burlesque performer Gypsy Rose Lee, here's a plot summary borrowed from what I wrote about Bloomington Civic Theatre's production in 2014.

We first meet Rose and her daughters Louise and June in an audition, as she famously calls out directions including "sing out, Louise!" Baby June is the star, a pretty and precocious little girl in blond ringlets, and Louise is the older and less talented daughter forced into the shadows. Rose promises her girls she will make them stars, and travels around the country getting them bigger and better gigs with the help of Herbie, their manager who's also an unofficial husband/father figure to the family. Louise and June soon outgrow the little girl act but their mother refuses to let them grow up. A teenage June runs away with one of the boys in the act to form their own act. Herbie and Louise encourage Rose to walk away and concentrate on their family, but Rose is not someone who gives up. She turns all of her focus to making Louise a star in a recycled version of the old act. But Vaudeville is dying, so the act ends up in a Burlesque theater. Rose promises that this will be the last gig and she will marry Herbie and walk away when it's over. But when given the chance to make Louise a star in the Burlesque world, she takes it, and shoves Louise into the spotlight. Surprisingly, Louise takes to this new role and shines, not needing her mother any more. In one of the most famous musical theater songs, Rose makes one final plea to the universe, asking when it will be "Rose's Turn" after all she's sacrificed.

I decided I needed to see this show when I saw the promotional material featuring Wendy Short-Hays as Mama Rose, who's the real focus of this show. Wendy has impressed in various roles on #TCTheater stages, mostly at Artistry in Bloomington. She did not disappoint here, playing this role that is one of the best in musical theater with confidence, wit, charm, professionalism, and strong vocals. She's surrounded by an all around talented ensemble cast of adults, teenagers, and children (although with a disappointing lack of diversity, even for a community theater in the suburbs). Kelly Nelson believably transforms from the unassuming young Louise to the confident performer Gypsy. Maggie Koebele shows us June is more talented that her mother's silly acts allow her to be. John Kundtz is an affable Herbie; Scott Ragan is a charming Tulsa performing one of my favorite numbers, "All I Need is the Girl;" and Kelly Danger as Tessie leads the strong and entertaining stripper trio, which also includes Kelly O'Sullivan as "bump it with a trumpet" Mazeppa and Francesca Wilson as Electra. As young Louise and June, Kate Regan and Kianna Saunders lead a whole host of adorable youngsters who are so much fun to watch. And kudos to the very versatile Ron Giroux for playing too many supporting characters to count.

The first musical I saw at the Hanifl Center had an orchestra comprised of three keyboards, so I'm thrilled to see an eight-piece onstage orchestra (even if they did have a few timing issues in the beginning that they eventually worked out). Music director Stephen Houtz leads the band that is often referred to and included as a part of the show. Director Paul Reyburn understands the show (he played Herbie in Artistry's production) and sets it in a run-down theater with minimal set pieces (which he co-designed with Dave Pust), filling it with organized chaos of the many people in this world, balanced with some quieter moments. A. Emily Heaney clads the cast in period appropriate clothing and some showy Vaudeville showpieces.

Gypsy continues at Hanifl Center for the Performing Arts weekends through October 6. Click here for info and details.