"Bent" by The BAND Group at the Phoenix Theater 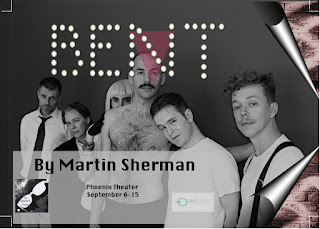 Partnering with OutFront Minnesota, The BAND Group is bringing us the 1979 play Bent about the imprisonment and murder of gay people in Nazi Germany. A look at the daily news should tell you that those days are not as long ago and far away as they may seem, with increasing violence and discrimination against the LGBTQ community. One of OutFront's current campaigns is to end conversion therapy, which is still legal in Minnesota. You can find more information about this and sign the petition here. And you can see The BAND Group's powerful and sobering production of Bent at the Phoenix Theater in Uptown through this weekend only.

We're led through the horrors of the Holocaust by Max (a compelling Adam Rousar), who, along with his live-in boyfriend Rudy (Andrew Newman), is sent to a concentration camp for being gay. What starts out as almost a romantic comedy - the morning after a wild night in 1930s Berlin with a guy (Aaron Boger) Max picked up at the club owned by definitely not queer survivalist Greta (Corey DiNardo) - turns dark very quickly. For a while Max and Rudy survive on the run, with a possible hope of getting out of the country with help from Max's uncle Freddie (James Satter). But eventually they're rounded up and put on a train to Dachau. In order to survive, Max chooses to deny Rudy and even the truth of who he is, making a "deal" to wear a yellow star (Jew) instead of a pink triangle (homosexual) because the pink triangles are supposedly treated the worst (if degrees of torture matter in this situation). But a fellow pink triangle (Kjer Whiting) he meets at the camp shows him another way.

This is a tough play to watch, obviously there's no happy ending here, with issues that ring true even (or maybe especially) 80+ years later. The bad guys (aka Nazis) are mostly heard and not seen, as characters are beaten and pulled off stage by invisible figures. This makes the one appearance of a Nazi captain near the end of the play even more threatening. Alex Church speaks softly, slowly, gently, his voice amplified in a manner that makes it chillingly sinister (sound design by Ben Harvey). Director Adrian Lopez-Balbontin and the entire team effectively convey the tension- and terror-filled ambiance of this story.

Bent continues through September 15 at the Phoenix Theater in Uptown (click here for details).