"Silent Sky" by Theatre Pro Rata at the Bell Museum 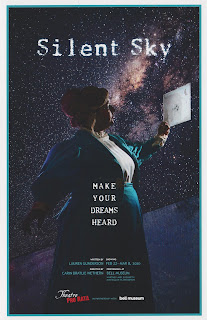 'Tis the season for Lauren Gunderson's smart, funny, modern, and inspiring plays about female scientists in history, and I am here for it (keep 'em coming, #TCTheater). A week after seeing DalekoArts' lovely production of Ada and the Engine (about mathematician and computer programmer Ada Lovelace), I saw Theatre Pro Rata's production of Silent Sky (about astronomer Henrietta Leavitt, which I had seen at Lyric Arts a few years ago). It's a great play, but what makes this production truly special is that it is staged in the planetarium at the Bell Museum on the University of Minnesota's St. Paul campus. Despite the fact that I got my graduate degree (in statistics, you can see why I'm so drawn to women in science plays) at the U of M, I didn't even know this museum existed (in my defense, the gorgeous new building just opened a year and a half ago). I hope to return to tour the museum sometime, but my first experience to it (through theater, natch) was a wonderful one. Being able to look up at the stars as Henrietta talked about them made the story feel so real. A truly inspired pairing of play and location by Theatre Pro Rata.

The play opens when Henrietta is offered a job at Harvard working for Edward Charles Pickering as one of the human computers, all of whom were women (see also the movie Hidden Figures, another example of the "harem effect" in science). She leaves her beloved sister to do this work that became her life, sometimes to the detriment of her relationship with the family she left behind. Along with her fellow computers she documented and classified the stars. But she wanted more, and the discovery of a pattern lead her to her great discovery that the distance to each star can be calculated (how do you measure a year? measure in light). The play also includes an obligatory but sweet romance with her colleague, but in the end, her work is what fulfilled her, and what she's remembered for.*

The play provides a picture of who Henrietta was, even if the timelines are a bit collapsed and unclear. There are a few references to "years" passing, but nothing to really anchor us in history. Based on my impression of the play I thought she died in her 20s or 30s, but in reality she was 53, still way too young of course (one could say she studied stars "like she was running out of time," because she was). But no matter, it's not a documentary. What Silent Sky does is convey Henrietta's wonder at the world and her fierce determination to answer the question of where we are in the universe.*

Theatre Pro Rata's Artistic Director Carin Bratlie Wethern directs the strong five-person cast and makes great use of the planetarium space; most of the action takes place in the space at the front of the domed auditorium, with some use of the aisles as well. On the dome is projected both landscapes (the family farm, the Harvard campus) and stars, as well as a beautiful array of changing light (note to my fellow motion sickness sufferers, you might need to close your eyes when the stars start spinning, or they'll never stop spinning). The period costumes are made of fabrics that subtly shimmer in the changing light, as if the stars are all around us. (Lighting design by Julia Carlis, fulldome photography by Dome3D Immersive Media Solutions, costume design by Samantha Kuhn Staneart.)

Henrietta is perfectly personified by Victoria Pyan in all her wit, determination, spirit, and drive. Danielle Krivinchuk (who also appeared in Lyric's production of this play) is warm and grounded as Henri's sister, with a believable sisterly chemistry between them. Amber Bjork is the stern boss of the workroom, but with heart; Sarah Broude is the fun-loving Scottish maid-turned-computer; and Carl Swanson is Henri's charmingly awkward boss colleague and suitor.

I've always felt that science and religion are flip sides of the same coin, an idea the play also explores in Henri's relationship with her (unseen) minister father and church-going sister. Both women have deeply held beliefs, one in science, one in religion. But maybe their beliefs aren't that different; both are a search for truth and an attempt to know the unknowable.*

Silent Sky runs only two more weekends, Fridays through Sundays. The museum is not open during the evening performances, but if you go to the Sunday performance you could arrive early to visit the museum (admission not included with ticket purchase). It's a wonderfully immersive theatrical experience that literally allows us to star-gaze along with Henrietta, a woman to whom we owe much of our understanding of them. Truly magical.


*Some text borrowed from what I wrote about Lyric Arts' production a few years ago.