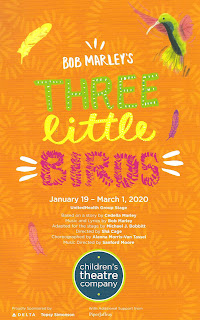 "Don't worry about a thing
'Cause every little thing gonna be alright!"
Bob Marley's most well known lyrics describe exactly the feeling one gets from watching Children's Theatre Company's* production of Three Little Birds. In just over an hour, this sweet and fantastical story plays out, about a scared and isolated boy who learns to be brave with the help of his friends, both human and bird. I must confess, I know very little about Bob Marley or his native Jamaica, and I'm not familiar with more than a few of his songs. This show is a great introduction to his music and his message, and it makes me want to board the next flight to Jamaica!

The story (based on a children's book written by Bob's daughter Cedella Marley) follows the classic hero cycle. Afraid of hurricanes, 11-year-old Ziggy spends most of his days inside watching the weather report. He's talked into leaving his house for an adventure by his mother and his friend Nansi, who's not afraid of anything. They're aided in their quest by Ziggy's best friend, who happens to be a bird, as they battle the evil Duppy, who needs to steal children's hair to live. After learning a bit about the history of Jamaica and "feeling the rhythm of the island," Ziggy realizes that he is brave, "when brave is the only option," and the performers send us out into the Minnesota winter with the warmth of Marley's Jamaica in our hearts.

Director Shá Cage takes us through this story with energy, humor, and heart, and directs a terrific six-person ensemble. The two young people in the cast are true finds. Ellis M. Dossavi Alipoeh is an earnest and relatable Ziggy as he reluctantly transforms from scared to brave. KateMarie Andrews is truly delightful as the spirited Nansi. The adults are pretty great, too: Kory LaQuess Pullam is gleefully evil as Duppy, and Lynnea Monique Doublette and Timotha Lanae play birds with graceful movement of fan scarves, plus various humans. Nathan Barlow (a former CTC child actor who has grown into a #TCTheater favorite) embodies the spirit of Bob Marley as Doctor Bird, in constant bird-like motion, singing these hope-filled songs and encouraging the audience to join along.

As I mentioned I'm not that familiar with Marley's music, but I don't think my foot stopped tapping for the entire show, and now I want to listen to all of his music! The easy going spirit of the music is so infectious, and it's well performed by the cast and five-piece pit orchestra, with music direction by Sanford Moore. The cast rarely stops moving and grooving, thanks to choreographer Alanna Morris-Van Tassel. The bright and colorful set and the fun and beautifully detailed costumes will have you feeling the warmth of Jamaica (scenic design by Lawence E. Moten III, costume design by Trevor Bowen).

This Bob Marley reggae musical for kids, while perhaps not the most in-depth of stories, will likely have you saying "ya so nice" by the end of it. It's a great first exposure to Jamaican music and culture for kids (and adults too).


*This is my first visit to CTC since the boycott was lifted a few months ago. You can read about my decision to participate in the boycott here, and about its resolution here. Not that everything is forgiven and forgotten, in fact I hope we never forget what happened at CTC so that we can continue to create safe environments for children and adults working in theater. I'm satisfied that the survivors are satisfied CTC is moving forward on the path towards reparation and healing.