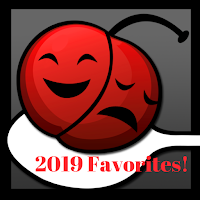 Happy New Year #TCTheater friends! This is the 10th year-end wrap up I have written on this blog; this summer I will mark 10 years of writing about theater in Minneapolis and St. Paul. That's a lot of theater, and a lot to love. This year I saw about 200 shows (not counting 29 Fringe shows), and I would like to share with you some of my favorite experiences of the year.

As I started to put together my list of favorite shows, a few theaters kept popping up over and over again. Instead of just listing them repeatedly, I decided to summarize each of their years individually.

It's no secret that Theater Latte Da has long been one of my favorite theater companies, but this may be their best year yet, with six gorgeous examples of doing theater musically.  It's impossible to pick a favorite in a year that included a lovely production of Sondheim's A Little Night Music, a musically stunning and cleverly staged production of Bernstein's Candide (a co-production with VocalEssence), the brilliant and transformative rock musical Hedwig and the Angry Inch (featuring a star turn by Tyler Michaels King), and a heartbreakingly beautiful new play by Harrison David Rivers, To Let Go and Fall, made even more emotional by the cello duo Jelloslave. And that was just the first half of the year! This fall brought us a dynamic Chicago like I've never seen before, and a return of the beloved (and my favorite) holiday show All is Calm.

I've long been a fan of Jungle Theater, but since artistic director Sarah Rasmussen took the helm a few years ago, it seems like they can do no wrong. Their seven shows, performed on two different stages, included two remounts (the incredibly smart, relevant, and successful play The Wolves, and the only Jane Austen fan fiction I ever need - Miss Bennet Christmas at Pemberley). They also produced four regional premieres and one world premiere, the hilarious new comedy Stinkers featuring the ingenious use of puppets. The Children explored the aftermath of a nuclear disaster with a trio of stage dynamos; School Girls, or the African Mean Girls Play brought us a smart, funny, nuanced look at teenage girls in Africa (that perhaps foreshadowed the historic wins of black women in all five major beauty pageants); Small Mouth Sounds said so much about humanity with so few words; and Ride the Cyclone is everything I want in a new original modern musical.

With plays and musicals big and small, Bloomington was the place to be this year. Artistry begin their year with She Loves Me which, although not an original choice in #TCTheater of late, was a charming production of a darling musical. They followed that up with what is an original choice, the regional premiere of Victor/Victoria. This musical written for Julie Andrews premiered in Minneapolis over 20 years ago, but has a timely message for 2019 of love, identity, and community (and featured #TCTheater star Ann Michels leading a huge and talented cast). Artistry's pair of plays included the regional premiere of Tinkers to Evers to Chance, using baseball as a metaphor for life, love, and heartbreak (hello 2019 Minnesota Twins), and a frequently produced classic Our Town that felt fresh and meaningful as ever. The cherry on the sundae of Artistry's year was the absolute perfection of A New Brain, an infrequently produced late '90s bio-musical by Falsettos composer/lyricist William Finn.

In 2019 the Ordway Center for the Performing Arts brought us two fabulous original and (mostly) locally cast musicals (the modern tap dancing extravaganza 42nd Street and the musically delicious Smokey Joe's Cafe), a new Ordway Cabaret series that explores the history of musical theater through the talented local performers' personal histories (the next installment "Gotta Dance" is coming up in February), and the pre-Broadway run of the fabulous, modern, feminist musical SIX, destined to become the next big thing.

This year, I made a record high three visits to the darling little theater DalekoArts in New Prague at the very Southern edge of the Seven-County Metro Area. I'm more and more impressed by the work they do; they make great choices in projects for their space and community, always well executed. From a delightfully inventive Peter and the Starcatcher, to an original outdoor walking history comedy play, to a remount of sorts of a hit Minnesota Fringe Choose-Your-Own-Adventure dating comedy. If you're not making the beautiful drive to New Prague 1-4 times a year, you're missing a #TCTheater gem.

One of the most exciting trends of recent years is more work by female artists. No one exemplified that more this year than the the History Theatre, which rebranded as HERstory Theatre early this year, producing three new works by women about women. Stewardess told the true story of a local hero in the women's rights movement, Sisters of Peace featured four Minnesota sisters and Sisters who have dedicated their lives to working for peace, and Dirty Business was a fun and inspirational musical about real-life female spies in World War II. HERstory continued this fall with the regional premiere of the hit Off-Broadway play/discussion circle Gloria: A Life, about living legend Gloria Steinem, and a remount of History Theatre's original play with music Beyond the Rainbow: Garland at Carnegie Hall. Here's hoping HERstory never ends!

I would also like to commend newish #TCTheater Company Uprising Theatre for the work that they do. They may not be on your radar, but they should be. Uprising dedicated their year to plays about gun violence, including original and established work. I saw three of their four plays, and all were thought provoking and relevant, followed by post-show discussions that allow the audience to process what they've seen. They also partner with local nonprofit organizations for every production, such as Moms Demand Action, to make their work extend beyond the walls of the theater. In 2020 they will produce four plays written by transgender or non-binary playwrights, voices that we need to hear more of, and continue to work with local nonprofits.
And now on to a listing of other individuals shows I loved this year:

Every year I like to name a few favorite new and/or established artists. It feels strange to refer to Becca Hart as One to Watch because I've been watching her, and calling her a Star, for several years now. But 2019 could be her breakout year, if only for her brilliant and gravity-defying performance in Ride the Cyclone. But that's not all, she was also one of five actors who brought to life the complicated world of Tolkien's The Hobbit, reprised her role in The Wolves, and was part of the expert comedy/drama ensemble of Small Mouth Sounds.


A true One to Watch, I didn't know much about Reese Britts before this year. But I do now. He absolutely stole every scene he entered in our Artistry's Footloose, was part of the fantastic ensemble of A New Brain, and made the role of Mary Bennett's adorkably bookish suitor his own in the Jungle's remount of Miss Bennet Christmas at Pemberley.

Lastly, I named this artist One to Watch in 2012, a few years before he was named the Ivey's Emerging Artist. I think it's safe to say that many people have been watching Tyler Michaels King in the years since. He is now the Artistic Director of the new company Trademark Theater that he co-founded, for which he co-created The Hollow (see above) and debuted a new alter ego, aging crooner F. Amos Lee, in a workshop performance. This was after beginning his year with a performance in the title role of Hedwig and the Angry Inch that was everything, followed by a completely different but equally moving performance in To Let Go and Fall. And then he spent the summer hoofing it up in 42nd Street. Can I pick 'em or what?

Whew, that's more amazing theater than one person could even ask for, and that was only in the Twin Cities! I also made my annual pilgrimage to New York City where I saw seven fantastic shows on and off Broadway, including the first Tony-winning Best Musical written and directed by women, Hadestown, a revolutionary revival of Oklahoma, and Fiddler on the Roof in Yiddish like it was always meant to be. I made my second visit to the Great River Shakespeare Festival in Winona for four excellent plays and some great discussions, and saw the heartbreakingly beautiful Minnesota premiere of another Tony-winning Best Musical, Fun Home, at the intrepid Renegade theater in Duluth.

Wishing you all a healthy, happy, and theater-filled 2020!