"Bernarda Alba" by Theater Latte Da at the Ritz Theater 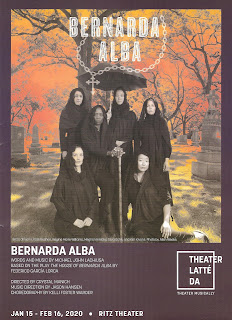 Theater Latte Da's area premiere of Bernarda Alba is unlike anything I've seen. The musical adaptation of the play The House of Bernarda Alba by Spanish playwright and poet Federico Garcia Lorca premiered in 2006, but the play was written in 1936 and first performed in 1945. It tells the story of a widow and her five adult daughters, who are suffering under their mother's strict control of their lives and bodies. The score is complex, haunting, and gorgeous, and the depiction of the lack of freedom and limited roles of women in society is sobering and not unfamiliar. Bernarda Alba feels different than a typical musical; when I attended opening night there was no applause during the show, partly because it doesn't follow the usual structure of clearly differentiated songs and dialogue with scripted applause breaks, and partly because it felt like we were under a spell we didn't want to break. It's a complicated piece,* and cast and creative team pull it off beautifully.

The story begins shortly after the death of Bernarda Alba's second husband. She insists that her five daughters, the oldest the product of a previous marriage who was abused by her stepfather, mourn their father by wearing black and staying in the darkened shut up house. The young women chafe against the restraints in different ways. The oldest is being courted buy a handsome young man who is after her money, and some of her sisters are jealous or in love with him themselves, leading to division and tragedy. Also in the house is Bernarda's elderly mother Maria Josepha, whom she keeps a locked in her room as a way to deal with her dementia, but she keeps breaking out and wandering the house, talking about how she's going to get married and have babies. The 90-minute show is really more of a character study of these very different and complex women, as well as the women that serve them.

The ten-person ensemble is made up of ten incredibly talented and diverse women, and each one of them gives a fully realized performance. Regina Marie Williams reigns supreme as the matriarch, stern and cruel, yet doing what she needs to do to ensure her and her daughters' survival in a world that is cruel to them. Britta Ollmann, Kate Beahen, Meghan Kreidler, Nora Montañez, and Stephanie Bertumen beautifully portray the daughters. Aimee K. Bryant is a sort of narrator/commentator as Bernarda's servant Poncia, Haley Haupt adds some lovely vocals as another servant, and Sara Ochs fills multiple roles, including hitching her skirt up into trousers to play a few male roles. Rounding out this dream cast is Kim Kivens, absolutely haunting and heart-breaking as Maria Josepha.

Director Crystal Manich is making her Latte Da debut, and has few #TCTheater credits, but is the perfect choice to bring this story to life. It's gorgeously staged, with movement and flamenco style dancing choreographed by Kelli Foster Warder. It moves at an unhurried pace, with characters moving in and out of the action, or merely observing from the side. Scenic designer Kate Sutton-Johnson places the story inside the walls of a Spanish house, with just a hint of what's outside. We hear dogs, gunshots, the sound of the hot dry wind, hinting at the world outside we never see, and the daughters are kept from. The young women are dressed in identical and beautiful Spanish influenced black mourning dresses with full skirts, lace sleeves, and red tied bodices. There's a moment when Bernarda dons a white dress with a skirt like a parachute, which creates some memorable images. Effects of light and shadow complete the all-around consistent and evocative design. (Sound design by Kevin Springer, costume design by Alice Fredrickson, lighting design by Mary Shabatura.)

The score (by Michael John LaChiusa) is truly unique and effectively adds to the emotions of the story. There are several a capella sections, almost chanting or wailing. It all sounds gorgeous and flawless as performed by these ten talented women, with accompaniment by a five-piece off-stage band led by music director Jason Hansen (the Twin Cities Theater Bloggers' favorite music director for two years running),

Just when it seems like there are no new musicals, and companies keep producing the same ones ever and over again, something like Bernarda Alba comes along. Not only has this specific show never been produced in #TCTheater before, but it's a truly unique creation. It's no surprise that it's Theater Latte Da, masters of doing theater musically, who bring it to us. It's simply stunning. (Click here for more info and tickets.)

I'll leave you with a few words from the director:


So why here, and now? What can Lorca's words, about "women in the provinces of Spain," teach us about where we came from and where we came from and where we are? Lorca shows us that these truths have existed for nillennia all over the world. The isolation of Bernarda's house reminds us that some voices have been squashed for too long at a cost. My hope is that you will leave the theater emotionally affected by this cautionary tale, and yet simultaneously feel a sense of hope for how we can repair the damaging influences of the past.

*To learn more about this piece and the creators, you can attend Theater Latte Da's "Pin Spot" series, hosted by Max Wojtanowicz, on January 27 (it's free!).