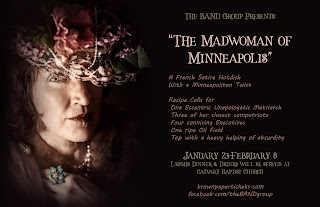 The little theater in the basement of Calvary Baptist Church is becoming one of my favorite theater venues, because it's intimate and versatile. The latest example is The BAND Group's adaptation of the mid 20th Century French satire The Madwoman of Chaillot, which they're calling The Madwoman of Minneapolis. They've turned the space into a cafe, complete with food and drinks, which makes for an immersive and intimate (but not interactive, thankfully) experience of this charming little story, with a message of environmentalism and community over consumerism that couldn't be more timely.

I'd never seen a production of The Madwoman of Chaillot, but I am familiar with the story from the musical adaptation Dear World (of which TTT did a lovely production a few years ago). Our madwoman owns a cafe in Minneapolis, rather than Paris (which is really just an excuse to throw in local references like the Twins, zipper merging, Honeycrisp apples, and various lake names). Why is she mad, you ask? Because she runs a cafe that is a place where everyone can feel at home, and she values friendship, community, and nature over money. If that's madness, this world could use a little more of it. When she learns of a plan by greedy businessmen to tear up her beloved neighborhood to harvest the oil that's beneath it and then build condominiums, she swiftly brings that plan to an end. Because "nothing is ever so wrong in this world that a sensible woman can't set it right in the course of an afternoon." Or a presidential term. #vote

The play is performed mostly on the floor space in front of the little stage, surrounded by about a dozen cafe tables on three side. A buffet dinner is served beginning 30 minutes prior to showtime (tator tot hotdish, veggie lasagna, vegan chili, and kale salad), and cast members fill water glasses and clear dishes, or sell flowers. They continue their roles as the show starts and the action moves from the cafe of the basement theater to the cafe of the world of the play.

Director Kjer Whiting and associate director Jex Arzayus create a light and fun tone for the show, to which the talented and likable 15-person cast is fully committed. There are a lot of people scattered around the large open space, and they're all fun to watch, even if not taking part in the scene. Meg Bradley is everything you want in a madwoman - warm, passionate, with a devious sparkle in her eye. Representing the evils of greed, Kevin McLaughlin is the shady company president, Jay Kistler is the lazy spoiled trust fund Bro (and also a cat, which is fun, but not as good as a real Maine Coon cat as advertised in the credit)s, Dan Britt is the ambitious prospector, and Emily Gustafson pulls double duty as a broker and a doctor. Jackie O'Neil and Cris Sanchez are sweet as the young couple who falls in love. The strong ensemble also includes Aaron Boger, Cate Jackson, Catherine Hansen, Jenna Pulkrabek, Julia Amundson, Kari Godfrey, Mickaylee Shaughnessy, and Siri Hammond.The cast is dressed in beautiful or silly or eccentric clothes, whatever best defines their character (costume design by Kaitlyn Larsen).

This 75-year old play feels more relevant than ever now with the climate crisis coming to a head. I couldn't help but think of the current dire fight to protect the Boundary Waters Canoe Area Wilderness from the pollution of a proposed mine very close to its borders. This play asks what we would rather have in our backyard, a sulfide-ore copper mine, or one of the country's oldest and most visited wilderness areas? #savethebwca

Head to the warm and inviting cafe in basement of Calvary Baptist Church in Minneapolis' Whittier neighborhood through February 8 for this charming new adaptation of the engaging and hopeful story of The Madwoman of Chailliot Minneapolis.