"Black Comedy" at Theatre in the Round 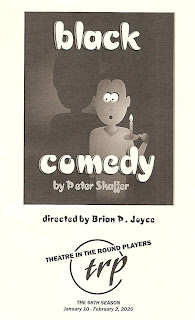 When looking at the #TCTheater schedule for the second weekend of 2020, I saw Black Comedy at Theatre in the Round and thought - what's that? I went to their website to check it out and saw the below photo of Josh Carson and Don Maloney, and my immediate thought was - yes, please! You might know Josh from his Fringe shows or his sold out annual parody A Very Die Hard Christmas, and Don from various shows at Lyric Arts (and other stages around town) including a very funny Odd Couple. Not only was I correct in my choice to see these two in a comedy, but the entire cast is fantastic in what is a classic British '60s farce of a play, with detailed and clever design to make this comedy in the dark really shine.

Th 80-minute play takes place in real time in a 1960s London flat. If that's not enough of a comedic setup, just before the guests are to arrive at said flat, they blow a fuse, pitching them into darkness. But we see the reverse; the play begins in darkness, and when the fuse blows the lights come up. As characters bring in a match, lighter, or torch (British for flashlight), the lighting dims and the characters are able to see. It's endlessly entertaining to watch characters stumble around as if in the dark, bumping into furniture and each other, or even better - just barely missing bumping into each other.

The story is that starving artist Brindsley and his new fiance Carol invite her father and a famous German art collector over to his flat. Embarrassed by the shabby furnishings, they borrow a few things from Brindsley's well-to-do neighbor Mr. Gorringe who is out of town. But when Gorringe shows up at the apartment after the blackout, along with Carol's stern father and another neighbor, the prim Miss Furnival, Brindsley attempts to remove and return all of the stolen furniture, replacing it with his shabby items, without anyone noticing. Add to that the surprise return of an ex-girlfriend and mistaken identities, and the whole evening turns into delightful, hilarious chaos.

Director Brian P. Joyce and this terrific cast mine all of the humor in the script and situation. I can only imagine how much fun their rehearsals were, and I sincerely hope they conducted some of them in the dark. Josh Carson is, as expected, seriously funny as Brindsley, performing spit takes, pratfalls, and much physical comedy as he literally throws himself into the role. Kaitlin Klemencic is delightfully charming as the spoiled '60s debutante Carol who likes to end words with "-ey poo," and Don Maloney is all blustery self-righteousness as her dear old daddy. Also great are Alison Anderson, having much fun with Miss Furnival as the teetotaler "accidentally" gets drunk; Matt Saxe as the refined Mr. Gorringe who has an explosion of his own; and Kendra Alaura as Brindsley's ex, pretending unsuccessfully to be the cleaning lady. Rounding out the cast late in the play are H. William Kirsh and Don Larsson as... well, I don't want to spoil it.

A fun feature of Theatre in the Round is that, being a theater in the round, the audience gets to walk across the stage to their seats. This is a great opportunity to see the set up close and personal, and this one is really fun to observe up close. It looks like a swinging bachelor pad from a '60s sitcom, with a bar, record player, funky lights, and lots of tchotchkes and pieces of art. Kudos to set designer Lee Christiansen, and to props designer Tyler Lanam for the detailed vintage items all around the set, including a stack of old playbills I saw on my way I out that I desperately wanted to rifle through but "don't touch the set!" The lighting is vital in a play like this, and A. Camille Holthaus gets it just right. We move from darkness with colored lights around the apartment, to full light representing blackness, to various levels of dimming when other "lights" are brought in. Completing the look are Carolann Winther's fun period costumes, including white go-go boots, natch.

Black Comedy is a classic farce from the '60s, complete with spit takes, pratfalls, double entendres, exaggerated situations, and love affairs gone wrong (it doesn't even need multiple doors to make the funny!). It's a fun idea and tight script that's well executed by the team at Theatre in the Round, the oldest theater in Minneapolis (continuing through February 2).