"A Doll's House, Part 2" at the Jungle Theater 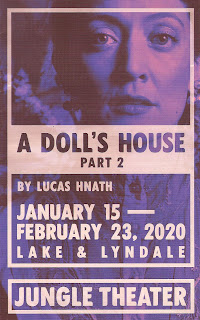 When I saw A Doll's House a few years ago I was struck by how much 19th century Norwegian playwright Henrik Ibsen's 140-year-old play still resonates. A few years ago playwright Lucas Hnath wrote a sequel that takes place 15 years later, so approaching the turn of the last century, but written with modern language and sensibilities. It feels both of its time and of our time. A Doll's House, Part 2 furthers the conversation that Ibsen began around marriage and women's role in society. And while maybe it's true that "we've come a long way, baby," history is full of steps forward and backward in terms of human rights, and this is a conversation that feels particularly important to have today. The Jungle Theater's regional premiere is beautifully done, as to be expected by the Twin Cities Theater Bloggers' favorite theater of 2019.

A Doll's House famously ended with Nora leaving her home, husband, and children to live a more authentic life. Fifteen years later, she has done so. A successful author and business woman, who because of her single status is afforded more freedom, opportunity, and independence than a married woman. Hence her dismay to find out that Torvald never filed the divorce papers and they're still legally married, which makes many of her actions of the last 15 years illegal. This 90-minute play takes place in real time as Nora discusses her marriage with her housekeeper and friend Anne Marie, her estranged husband Torvald, and daughter Emmy whom she hasn't seen in 15 years and who doesn't even remember her.

The play takes place near the end of the 19th Century, but Nora's views on marriage, family, and relationships are very modern. As is the language they use, and the use of video projections of words, including a Star Wars like intro at the beginning, an introduction of each character with loud music and their name flashed in huge letters, and rolling credits at the end of the play. On the night I attended there was a group of students from a nearby college, and I couldn't help but think that the modern media techniques help modern young people get into the story. This is no dreary period piece (and of course neither is the original); this is a modern look at women's roles and women's rights seen through the lens of late 19th Century Norway.

This is what I like to call a talky play, in a good way. It's essentially a series of two-person conversations, all involving Nora. And this dream team of a cast is great in all combinations. Laurie Metcalf won a Tony for playing Nora on Broadway, but we get Christina Baldwin, who's pretty amazing too. Her Nora is so strong and inspirational, admirable yet frustrating too in some of the choices she makes. Angela Timberman seems to be typecast as the smart and savvy household servant, but it's a role she plays well, making Anne Marie a real part of the family. Steven Epp's Torvald is not all bad guy, with layers and depth. Christina and Steven are well-matched and their scenes together are a highlight as they cover the full range of emotions of this complicated relationship. Finally, Megan Burns bursts into the play like a ray of sunshine as Nora's daughter who couldn't be more different from her, trying to resist the pull of this mother she's never known, but still emotionally affected by the meeting.

The design is a mix of the Victorian era and the modern. The use of modern music, video projections, and a set that is "a deconstructed Victorian room projecting out into the audience" (from a note in the playbill). Concentric prosceniums in a sort of shabby golden color, with just a few chairs placed around the perimeter (and used well by the cast for emphasis), reminds us that this is not Nora and Torvald's lovely, pretty, happy-on-the-surface home of 15 years ago. The gorgeous costumes have just a touch of the modern, and lighting changes signify when the attention moves from one character to another. (Scenic design by Chelsea M. Warren, costume design by Mathew J. LeFebvre, lighting design by Marcus Dilliard, and sound design by Sean Healey.)

If you've been wondering what happened to Nora after she walked out of that door, wonder no more. If you've never heard of Nora, Torvald, or Ibsen, this play is a wonderfully modern introduction to an ahead-of-its-time classic of the stage. Continuing through February 23 at the Jungle Theater in the Lyn-Lake neighborhood of Minneapolis.