"Noura" at the Guthrie Theater 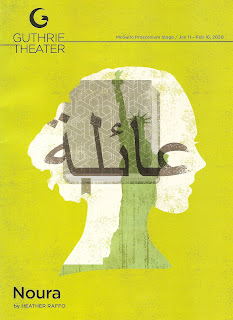 The night after seeing Jungle Theater's production of Lucas Hnath's sequel to Ibsen's A Doll's House, I saw Heather Raffo's Noura at the Guthrie Theater, which is, among many other things, a response to A Doll's House. But it's a much different story. This Noura is in an actually good marriage, not just a seemingly good marriage, with a supportive husband. But yet, as the playwright says in a note in a playbill, "women all around me, in strong marriages with truly great husbands, were drowning." But it's not just her role in her marriage that Noura is questioning, she's also questioning her very identity as an Iraqi refugee and new American citizen. She mourns for the culture and the community that she has lost, desperately trying to recreate it on different shores with a scattered family, and finally becoming overwhelmed by it all. As she says in the play, "I don't know how to let go and hold on at the same time." This is a devastating play, that brings to light issues of worldwide refugees, the destruction of war, cultures lost, individualism vs. community, and personal identity. It's incredibly current and relevant, and beautifully presented by the cast and creative team.

The play takes place on Christmas Eve, with Noura preparing for a big celebration with her husband Tareq, son Yazen, and family friend Rafa'a. (Something I didn't know is that there is a large Christian community in Iraq, in fact one of the oldest Christian communities in the world.) The family is also expecting the arrival of a young woman, an orphan from Nora's hometown in Iraq that she has sponsored to come to the US and go to college. But when the long expected Maryam arrives, she doesn't fit Noura's expectations of her, causing Noura to question her own life choices. The thought that Maryam might not come to Christmas dinner, or Rafa'a either, her childhood Muslim friend who has been attending Christmas dinner for years, throws Noura into an existential crisis about her place in the world and her culture that is slowly slipping away. It's an epiphany in some ways much more devastating than that other Nora's, but she doesn't walk out the door.

Director Taibi Magar returns to the Guthrie to bring this beautiful and devastating script to life, with much heart and realism. None of the adult cast is local, but the two boys alternating in the role of 11-year-old Yazen (Aarya Batchu and Akshay Krishna) are, and the one I saw is a total natural who holds his own among the pros. Gamze Ceylan is magnificent as Noura, taking her through the entire emotional journey in a way that feels brutally real. Fajer Kaisi is a charmer as Tareq, making the marital conflict that much more affecting when it comes. Kal Naga's affable Rafa'a fits right in with the family, and Layan Elwazani gives a strong and spirited performance as Maryan. The cast makes for a believable family unit, full of familiarity and conflict.

The design enhances the storytelling and adds a haunting quality at times. The family home is walled in by moving boxes with the Statue of Liberty on them, with the only furniture a huge Christmas tree and kitchen island, adding an unsettled feeling even though the family has been in the country for eight years. Snow softly falls as Noura sits on a rock and smokes a cigarette outside, the only thing she does for herself. She sometimes hears whispers, of herself, her family, her past, that seem to be coming from all around the theater. (Scenic design by Matt Saunders, sound design and original music by Sinan Refik Zafar)

Like in the recent Broadway tour of The Band's Visit, it's so wonderful to see an entire cast of Middle Eastern decent, to hear an authentic story that depicts the full range of humanity in these characters. The Guthrie is presenting two more works by Arab artists (Grey Rock this weekend and Jogging next weekend, both in the Dowling Studio) and a community conversation after this Sunday's matinee of Noura, which will include the playwright. Click here for more information on this "Celebration of Arab Artistry" and to make reservations for this free event.

It's so important to understand, empathize, and find community with our fellow human beings from different cultures, religions, and nations, and theater allows us to do that. Noura is a beautiful example of that.

You can see Noura on the Guthrie's proscenium stage now through February 16.