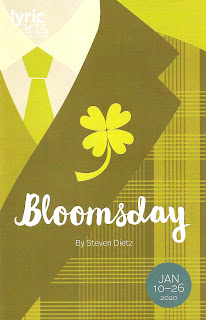 A character in Steven Dietz's play Bloomsday says something like, "a sunny day is nice, but on a rainy day the ache for the sun is nicer." This distinctly Irish sentiment is a good description of this bittersweet story of a pair of star-crossed lovers meeting across space and time. It may not be a happy ending, but the ache for these two characters to find happiness is grand. Lyric Arts' new production features a strong four-person cast and lovely design that bring us right into this charming and unconventional love story.

I've seen a handful of Steven Dietz plays, and they're either grounded in realism (e.g., Rancho Mirage) or a little trippy (e.g., Rocket Man). Bloomsday falls into the latter category. We meet Caithleen and Robert in the present and 35 years ago, with both time periods and all four character versions existing, somehow, in the same space. Whether it's a dream, hallucination, fantasy, or mental illness doesn't really matter if you let go of the idea of linear time (which I know is hard to do, but just go with it). We learn that Caithleen's mother was hospitalized for a mental illness that manifested itself in seeing people at the wrong ages. Is this whole story Cait doing the same thing?

The relationship between Caithleen and Robbie began when the 20-year old American, freshly dumped by his girlfriend, made a spur of the moment trip to Dublin. He stumbled upon the 20-year old Irish woman giving a James Joyce tour of Dublin (the title refers to an actual Dublin celebration named after a character in Joyce's most famous novel Ulysses). The two fall in love, or something like it, over the course of a day. But they part ways, not to meet again for 35 years, when Robert, now a college professor who teaches Ulysses, returns to find the girl of his memories. To say the narrative switches back and forth between the two timelines doesn't cover it; in fact the timelines fold in on themselves, so that we have scenes between the young lovers, the old lovers, one old and one young, and, most interestingly, the older and younger version of the same character in conversation with themselves. The past, present, and future are all wrapped up together in this exploration of love, time, regret, hope, and fate.

Director Elena Gianetti manages this tricky and trippy narrative structure well, with help from lighting (designed by Shannon Elliot) and sound (designed by Lea Brucker) to create that sense of shifting time and space. Gillian Constable is a delight as young Caithleen, full of spunk and optimism, yet wariness of the future due to her difficult past. It's quite easy to believe that she grows up to be Lolly Foy, who retains some of the characteristics of youth as the elder Cait, but wiser and more world weary. Brandon Homan is all young man bravado as Robbie, while Jeffery Goodson portrays Robert with more steadfastness, full of regret at lost chances, and perhaps a bit of desperation knowing the past cannot be changed (or can it?).

The design team has created a mini Dublin on Lyric Arts' stage, starting with the Irish music played before the show and during intermission. A city street is recreated complete with cobblestone street, frames of buildings in bold primary colors, Irish signage, quaint benches and tables, and warm lights strung above (scenic design by Brian J. Proball). The two Caithleens' lovely Irish brogues complete the atmostphere of the Emerald Isle (dialect coach Foster Johns was featured on the most recent episode of The Bazzness, a podcast about #TCTheater artists now in its second season).

This lovely, sweet, sad, trippy, and very Irish play opened last night and continues on Lyric Arts' Main Street Stage through January 26. I'll leave you with Robert's favorite line (actually the only line he likes) from Ulysses, which feels quite relevant to the themes of the play: