"The Bridges of Madison County" at Artistry 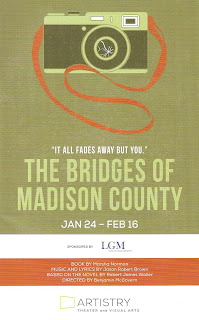 As frequent readers of this blog may know, I'm not generally a fan of turning movies into musicals. And I'm not sure that the 1995 movie The Bridges of Madison County, adapted from the 1992 best-sellimg novel by Robert James Waller, was crying out to be a musical. But I am sure that Jason Robert Brown's score is one of the best musical theater scores ever written. And not just because it's absolutely stunning to listen to, but also because it so effectively expresses the emotions of the characters. The music makes you feel what they feel, so much so that I was blowing my nose into a tear-soaked tissue at the end of Artistry's regional premiere production. This is perhaps a story that plays better on a smaller stage, tender and intimate, so I'm thrilled to finally see a #TCTheater production. Artistry has assembled simply the best local cast you could ask for and created a show so gorgeous that it's not to be missed. As I wrote about the tour a few years ago, and is even more true now, "If you're a fan of music-theater, or just music in general, go see this show to experience one of the best scores coming out of Broadway in recent years, wrapped up in a sweeping romance."

The setting is rural Iowa in 1965 Iowa. Francesca has lived there for nearly 20 years, after marrying an American soldier as a way to escape her hometown of Naples, Italy after the destruction of WWII. She's built a good life for herself and her family, which includes two children, but something is missing (think A Doll's House, which seems to be the theme of the month). Which is where "hippie" photographer Robert Kincaid comes in. She meets him while her family is away showing the prize steer, and they embark on a whirlwind romance that is doomed from the start. But as they say, "just because something ends doesn't mean it wasn't successful.*" The musical adaptation adds a few layers to the story from the novel and the movie, telling us more about the town and Francesca's family, but this brief but life-changing love story is still the heart of the piece.**

Now that the obligatory plot summary is out of the way, let's talk about this luscious music. Jason Robert Brown won the Tony not just for the score but also the orchestrations, and deservedly so. He seamlessly combines several musical styles, including the Italian sound of Francesca's homeland, folk/country tunes fitting to the rural farm setting, and sweeping love ballads. The melody lines are surprising, the harmonies lush, the orchestration ranges from a few stirring a capella lines to a simple cello opening the show to the full orchestra with guitars and strings, and the music and lyrics really show you who these people are. In a word, the score is flawless. And it's helplessly, hopelessly romantic. In a note from Mr. Brown, he says "I felt myself sometimes butting up against the corny, the cheesy, the sentimental, but I decided in those moments to push harder through it, not to be cynical about love or family but to sing about them with ecstatic truth." Mission accomplished. The Bridges of Madison County is essentially a fairy tale for adults, and Mr. Brown's music and lyrics almost make me believe in fairy tales.**

Speaking of flawless, the original cast featured Kelli O'Hara and Steven Pasquale, a tough act to follow. But I cannot think of any better choices in #TCTheater to sing these roles than Jennifer Baldwin Peden and Eric Morris. Both are powerhouse vocalists, who are also experts at conveying emotion through song. My eyes started filling with tears the moment Jennifer opened her mouth to sing the introductory song, which pretty much continued throughout the whole show. Some of her songs are almost operatic in nature, and we know she can sing opera. The way she unhurriedly caresses the notes and sings through every word is stunning. Eric is an equal match for her, and makes different choices from Steven Pasquale, making the role his own. The two of them singing together is an absolute thrill, and I fully believed in their transformation from strangers to lovers (although Artistry should consider hiring an intimacy director, especially for shows like this).

I have to admit that when listening to the Broadway cast recording (which I do often), I often just listen to the the Francesca/Robert songs and skip over the rest. But I didn't feel that way watching the show, which is a credit to this talented ensemble, each one of whom is a star in their own right. Alyson Enderle and Ryan London Levin are adorably engaging as Francesca's bickering children. Charlie Clark is strong throughout the show as Francesca's well-meaning husband, but really lets loose on the country/gospel song "When I'm Gone" in a way that makes me want to see more of that. Wendy Short-Hays and Fred Mackaman are sweet as the nosy neighbor couple that have their own sort of love story, no less because of its lack of drama. Becca Hart proves the adage "there's no such thing as small parts," especially for the Twin Cities Theater Bloggers' favorite musical performer. She shines in a number of small roles, most notably as Robert's ex in the lovely song "Another Life." Rounding out the cast are Lydia Wagner and Luke Harger, making the most of multiple roles.

Under director Benjamin McGovern, the story flows seamlessly from the farmhouse to the fair and back again, with fluid musical scene transitions. Resident music director Anita Ruth conducts the nine-piece pit orchestra, five of them strings, and makes this score sound every bit as lush, gorgeous, and moving as it should. The rolling set pieces represent the walls of the farmhouse, the frame of the bridge, the front seat of a truck, with simple elegant lines, and the lighting guides us through the different emotions, settings, and times of day. The 1960s era is well represented by the period farm-casual-chic costumes, and even the wigs are a lovely character defining touch. (Scenic design by Rick Polenek, lighting design by Michael P. Kittel, costume design by Ed Gleeman, wig design by Paul Bigot.)

The Bridges of Madison County continues at Artistry in Bloomington through February 16. I've never seen an Artistry show twice, but I just bought a ticket to the closing performance. It's a fine example of a flawless musical theater score, with the music and the heart-wrenching story beautifully brought to life by the team at Artistry.

*"Just because something ends doesn't mean it wasn't successful" is a quote from playwright Philip Dawkins' one-act play Failure: A Love Story. His new play Spamtown USA opens at the Children's Theatre next month.
**Some text borrowed from what I wrote about the Broadway tour in 2016.