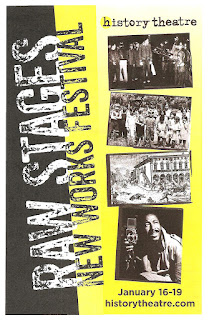 January may be the depths of winter in Minnesota, but it also brings one of my favorite theater events of the year. History Theatre, or HERstory Theatre as it's currently known, holds workshops and a public reading of four new works of theater in what they call their "Raw Stages" festival. For a theater that produces as many world premieres as History Theatre (something like 70% of their work is new), this is an important part of their season. This is my seventh year attending Raw Stages, and it's super fun to see a reading of an exciting new work, typically about a true Minnesota story, and then watch it continue to develop and often receive a full production a season or two later. In fact History Theatre's next three productions this year were part of last year's Raw Stages - Superman Becomes Lois Lane, Not for Sale, and Runestone! A Rock Musical. I only missed one of this year's readings (thanks, winter), and they're all really exciting work that I hope to see more of. A post-show discussion follows every reading, which is often the most moving part as people who lived and remember the story share their experiences. It's a powerful experience in and of itself, and also provides a glimpse behind the scenes. What follows is a short description of each play and my thoughts.

Thursday, January 16, 7:30pm
WILSON’S GIRL: Based on the memoir Packinghouse Daughter by Cheri Register and adapted for the stage by Eva Barr
An emotionally charged recounting of the turmoil in Albert Lea during the 1959 Wilson’s meatpacking strike as seen through the eyes of a teenager.
Directed by: Suzy Messerole
Dramaturg: Laurie Flanigan Hegge
Cast: Norah Long, Katie Bradley, Jefferson Slinkard, Rex Isom
My thoughts: A vegetarian goes to a play about a meat packing plant. It sounds like the setup to a joke, but it's actually a fascinating story about a true Minnesota event I had never heard of. The meat packing industry treats animals and humans inhumanely, and in 1959 the employees of Wilson's in Albert Lea MN had had enough. The strike reached such a level of impending violence that the governor sent in troops and shut the plant down. This engaging play tells the story from a 14-year-old girl's perspective, and while there's a bit of a jumping around in time that could be smoothed out, the older version of the character adds perspective, and the 4th wall breaking adds interest. I look forward to seeing more of this play, as well as the Children's Theatre's world premiere play Spamtown USA, about a similar strike in nearby Austin.

Saturday, January 18, 2pm
JESSE JAMES: by Jeffrey Hatcher and Chan Poling (Creators of History Theatre’s hit musicals Glensheen and Lord Gordon Gordon)
The musical telling of the notorious bandit and his gang who came to Northfield, Minnesota. It was all downhill from there—after their failed Great Northfield Bank Robbery!
Directed by: Ron Peluso
Music arrangements by: Robert Elhai
Music direction by: Jake Endres
Cast: Tyler Michaels King, Ben Bakken, Jen Burleigh-Bentz, Terry Lynn Carlson, Ron Collier, Jennifer Eckes, Elena Glass, Kiko Laureano
My thoughts: Friends, I think the History Theatre has another hit on its hands with this exciting new Hatcher/Poling musical, that feels much more fleshed-out and complete than most musicals at this stage. The songs are all fantastic, the dialogue clever, the tone a great mix of comedy and tragedy, and who doesn't love Minnesota's favorite outlaw Jesse James? The only surprising thing is no one has written a musical about Jesse James before. OK maybe they have, but doubtfully this successfully. Having an ensemble that plays multiple roles, including female actors playing male roles (since there aren't a lot of female roles in this story), is a great twist. In an interview Chan Poling said this musical was more Hamilton than 1776, and I totally get that feeling.

Sunday, January 19, 2pm
PARKS: by Harrison David Rivers with Robin Hickman
Raised amidst the violent racism of the 1920s and ‘30s, Gordon Parks chose to fight back with a camera instead of a gun. Inspired by the life of the iconic photographer, PARKS tells the story of a young black man’s journey to becoming an artist. The trials and tribulations; the triumphs. The pain, the glory and the love.
Directed by: Harrison David Rivers
Music direction by: David Hurst
Cast: Kevin West, Jon Michael Reese, Pearce Bunting, Yolanda Bruce, Ivory Doublette, A.J. Friday, Jucoby Johnson, Mikell Sapp
My thoughts: I was incredibly moved by last year's iteration of this play, which has gone through significant changes but is still just as powerful. Last year's version "juxtaposes two stories: Gordon's story growing up poor and black in Kansas City and St. Paul, working as a waiter and busboy, and discovering his passion for photography; and the story of a modern playwright writing Gordon's story and finding parallels with his own." The story of the playwright has been removed, focusing on Gordon's "origin story" and what led him to be an artist, specifically a photographer. Music has been added in the form of traditional songs of the era (early 20th Century) and the result is a much more streamlined story of perseverance through racism and adversity, using art as his Choice of Weapons (the title of Gordon's autobiography). It's a beautiful and hopeful story (the only reading to receive a standing ovation), not just a fitting tribute to this great local artist but also a way to continue his legacy.