"A Flight of Short Musicals" by Theatre Elision at Elision Playhouse 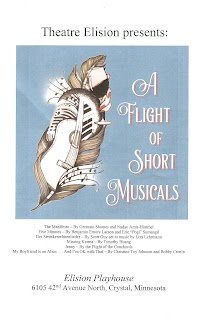 For the last three years, Theatre Elision has been bringing us short rarely done or original musicals. With A Flight of Short Musicals, they're bringing us six super short rarely done or original musicals, all in one night! They're all truly delightful and unexpected, at least one locally written, and performed by a talented local cast. If that weren't enough, your admission also includes a flight of three drinks (wine, or alcoholic or non-alcoholic cocktails), delivered to your seat during short intermissions. It makes for a really fun and special evening of enjoying new music and drinks. Unfortunately what's also short is the run of the show - only two performances remain! So head to the cozy and welcoming new Elision Playhouse in Crystal (on 42nd Ave just off 100) this weekend to catch this fun and original evening of music-theater (click here for more info and to reserve tickets).

Six musicals, 10-15 minutes in length, are performed in three acts, with a drink served before each one. An ensemble of eight (Anna Hickey, Christine Wade, Jim Ahrens, Justin Michael Cooke, Kyler Chase, Leslie Vincent, Tristen Sima, and Vanessa Gamble) performs in varying groups of two to five. The performance is structured as a staged reading, with the cast reading from scripts, but still fully performing both vocally and emotionally, accompanied by music director Harrison Wade on keyboard. Most of the musicals are comic in nature, although there are a few poignant moments as well. Between acts the cast, who sits on stage and watches when not performing, comment a bit on what they've just seen and decide "it's time for another drink!"

Here's a brief description of what you'll see if you go (and you should).

The Manifesto
by Germaine Shames & Nadav Amir-Himmel
Marx and Engels and their wives sing about, well, The Communist Manifesto. And stuff. Which is not nearly as boring as it sounds and is actually quite charming.

Five Minutes
by Benjamin Emory Larson and Eric "Pogi" Sumangil
Written by local artists, this musical covers the five minutes before a woman meets her birth mother for the first time, and is sweet and funny.

Der Strunkenwhitenleider
by Scott Guy set to music by Liza Lehmann
This grammar nerd musical was my favorite of the night. The title refers to the authors of The Elements of Style, which said grammar nerd reveres to the point of losing friends. He's visited by the fading spirit of the apostrophe, whom (yes whom, not who, thank you very much) no one knows how to use any more. They sing about the proper use of apostrophes and it's just the best. 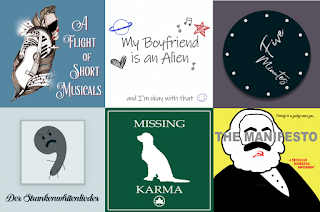 Missing Karma
by Timothy Huang
A sad and funny little musical about a couple burying their dog and then discovering the dog was the only thing holding them together.

Jenny
by Jemaine Clement and Bret McKenzie
A very Flight of the Conchords song about mistaken identity (if you like music-comedy and don't know FOTC, you need to watch their HBO show and any and all youtube videos you can find).

My Boyfriend is an Alien... and I’m OK with That
by Christine Toy Johnson & Bobby Cronin
Just a star-crossed love story about an alien and a witch and their magical witch-alien baby.