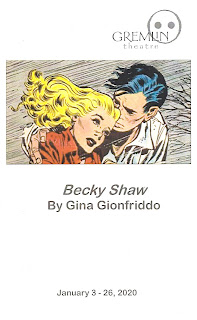 Just who is Becky Shaw and why does she have a play named after her? That's a good question, and even after seeing Gremlin Theatre's production I'm not sure I know. But I think maybe she's a little bit like the gentleman caller. It's not really about her, but about what she represents. She's a catalyst for change in one family's life. A family full of horrible people saying horrible things and treating each other horribly. Yes, Becky Shaw is one of those plays, one of those unlikable people plays that make you laugh but also feel guilty about laughing. If you're looking to start this new decade with positivity and light, this is not it. But if you're looking for a super dark comedy about despicable people, meet Becky Shaw!

But first, let's meet the family Becky Shaw descends upon. Mother Susan and daughter Susie have a complicated relationship. Susie is mourning the recent death of her beloved father, Susan not so much. She's hooked up with a much younger man (whom we never see), who may be after her money, which Susan is OK with because she has MS and he helps care for her. Then there's Max, who was taken in by Susan and her husband when he was ten years old and his mother died (and his father didn't want him). Max is a lot like the woman who raised him - cold, pragmatic, decisive, concerned about money because somebody has to be. Max and Susie have a co-dependent not quite brother/sister relationship - it's complicated. When Susie and her husband Andew set Max up on a date with Becky, one of Andrew's co-workers, she becomes intricately involved in their lives in unexpected ways. Is Becky a master manipulator, or a helpless victim? The play doesn't make that clear, but it's probably a little of both.

Director Ellen Fenster often makes me cry, but not so here. Instead she directs this strong five-person cast in wringing out all of the sharp (and at times unpleasant) humor in the script. Olivia Wilusz makes Susie both sympathetic and exasperating. Logan Verdoorn as Max is so good at being a jerk as to almost elicit boos. Chelsie Newhard is enigmatic as the title character so you're not quite sure what to make of her. Kevin Fanshaw's Andrew is the only somewhat likable character, but even he makes some questionable choices. Last but not least, Jodi Kellogg makes a few brief but memorable appearances as the stern mother Susan.

The play takes place in various bedrooms and living rooms, neatly accomplished by rotating a few set pieces and displaying images on several screens. Characters are dressed in modern attire that helps tell us who they are. (Set and lighting design by Carl Schoenborn, projection design by Emmet Kowler, costume design by Mandi Johnson).