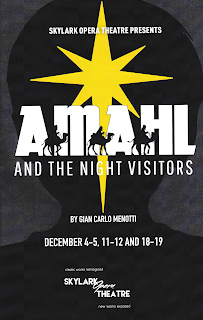 Time to celebrate the return of another theater company back after the extended intermission of 2020-2021, namely Skylark Opera Theatre, who brings us accessible opera in English! They return to live performance after more than two years with Amahl and the Night Visitor, a one-act opera by Italian composer Gian Carlo Menotti. The first opera written for American TV (in 1951), Amahl tells the Nativity story through the eyes of a child who sees the star and is visited by the Three Kings. It's a sweet little story (just about an hour long), well performed by the large and talented cast in the intimate space of Park Square Theatre's Andy Boss thrust stage. But only three performances remain this weekend, so act fast to catch this charming holiday* offering for kids and adults alike (click here for info and tickets).Being an opera, the show is entirely sung through, in very understandable English. Amahl is a young boy (with twins Oskar and Henry Helle-Morrissey alternating in the role) who uses a crutch and lives with his mother. Something of a dreamer, Amahl's mother (Vicki Fingalson, who sings beautifully and with great emotion) knows better than to believe all of his stories. But the one he tells her about the bright star with a long tail, and the Three Kings (played by Maje Adams, Rob Riordan, and Wesley Frye with gorgeous harmonies) that arrive on their doorstep, happens to be true. Amahl's mother welcomes the travelers into their humble home and calls upon local shepherds to bring food and entertainment (a lively and expressive dance choreographed by Penelope Freeh and performed by herself and Sam Johnson) for the impressive and intimidating guests. Lessons are learned about kindness and generosity by all parties, and the Kings continue on their way to visit a very special child.With stage direction by #TCTheater fave Gary Briggle, and music direction by Carson Rose Schneider (who also plays keyboard, along with Jordan Buchholtz), the story is clear, charming, and sounds gorgeous. In the intimate space, singers aren't miked (other than the child playing Amahl), so the sound is rich and pure. It's a fairly large cast for such a small space, with all the shepherds and kings, but it doesn't feel crowded. The shabby but neat home is represented by one wall with a fireplace, and the cast is dressed in neutral-toned tunics or dresses (set design by Ann Gumpper, costume design by Melanie Wehrmacher).
While likely unknown by most, Amahl and the Night Visitors is a wonderful holiday music-theater option. It's a great introduction to opera for kids with its brief length, clear and understandable story, and sweet and seasonally appropriate message of welcoming guests and strangers. Click here for more info and to purchase tickets to one of the three remaining performances.