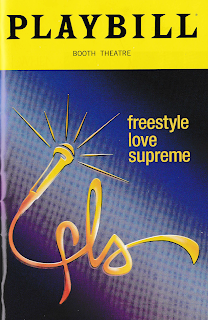 Highlights: This high energy show is so much fun, a wonderful welcome back to Broadway! The fantastic regular cast (whom you may not have heard of) is often joined by more famous guest stars. But regardless of which of these talented performers you happen to see, the show is a hit. I attended on a night when semi-regular guest star James Monroe Iglehart (Tony winner for Aladdin) joined Andrew Bancroft, Aneesa Folds, Chris Sullivan, and Anthony Veneziale (accompanied by freestyle musicians Kurt Crowly and Tarik Davis). The show is comprised of several different segments, many of which incorporate feedback from the audience, with Anthony as the genial host interacting with the audience and making sure everyone (who wants to) is heard. Most of it is pretty silly stuff, but it turned poignant in the segment in which each performer told a true story from their life (around butter). Each one of these performers is really so talented in their own specific way, whether it's beat-boxing or singing or comedy, and they work and play together really well. They're obviously have a great time, which means the audience does too, as the 90 minutes flies by. This is the kind of thing I usually see at a Fringe Festival, and it's pretty great that it's on a Broadway stage. They won a special Tony Award for the initial run in late 2019, and returned this fall (through January) to help reopen Broadway.

*Once again, I'm using an abbreviated Fringe-style summary for my NYC 2021 trip, since I am in the greatest city in the world with much more exciting things to do than write! Click here to see all of my Broadway-related blog posts.