Kate Beahen and the Hometown Favorites at Lyric Arts 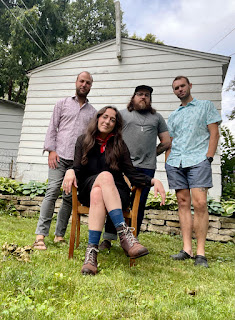 When Lyric Arts had to cancel a few weekends of their production of It's a Wonderful Life due to breakthrough COVID cases amongst the large cast, they called on Kate Beahen to help fill a few dates on the calendar, and encourage patrons to remember Lyric Arts or other local theaters in their year-end giving. A Lyric favorite and native of the Anoka area, Kate has appeared many times on the Main Street stage, as well as other stages around town, in both plays and musicals (my favorite: playing the Idina Menzel role in Lyric's regional premiere of If/Then and absolutely making it her own). She recently formed a band with her brother Bob and a few of her friends, calling themselves The Hometown Favorites and appearing at Crooners Supper Club. In the few days before Christmas, they did two holiday* shows at Lyric, and I was lucky enough to catch one of them. Kate's an incredibly talented vocalist and performer, and is also a natural at hosting a show and bantering with the band and the audience. It was a much needed fun and festive evening of holiday music and cheer.

In about 80 minutes, Kate performed a bunch of holiday favorites (including "Santa Baby," "Walking in a Winter Wonderland," "You're a Mean One, Mr. Grinch," "This Christmas," and my fave, "Merry Christmas, Darling"), as well as a few non-holiday tunes (the Jackson Five's "I Want You Back" and a soul-nourishing singalong to "I Can't Help Falling in Love With You"). All really great and unique takes on these familiar songs, and in between songs she's funny, authentic, and self-deprecating, chatting with the audience and making us feel part of the show.

The Hometown Favorites include frequent #TCTheater music director Louis Berg-Arnold on keyboard, Bob Beahen on percussion, Kyle Baker on upright bass and guitar, and Bryan Highhill on trumpet (missing at the Lyric shows was guitarist Chris Graham). Together with Kate's vocals, they make a great, sometimes sort of jazzy, sound. Their non-holiday repertoire includes pop, standards, and of course, musical theater. (Sound design by Paul Estby and lighting design by Jim Eischen.)

Kate had a few guests join her, including her other brother Bradley Beahen, who was in the building rehearsing for Lyric's upcoming production of [title of show]** which he's music directing. There's nothing quite like sibling harmony, as they showcased on "Have Yourself a Merry Little Christmas." They were joined on the harmonies by Kate's young friend, the lovely-voiced 17-year old Mabel Burley, who stuck around and sang a few more songs with Kate, as well as a solo.

You can find out where to see The Hometown Favorites in 2022 (likely returning to Crooners on a date TBD) at KateBeahen.com.

*You can read about all of the holiday shows I've seen here, a few of which are still playing.