NYC Theater Trip 2021: "Company" at the Bernard B. Jacobs Theatre 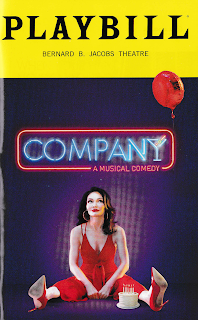 Summary: A revival of the Sondheim favorite about a singleton turning 35 in the midst of married couples, but this time the singleton is a woman.

Highlights: Company is one of my favorites, and I've long wondered what it would be like if the genders were swapped. Wonder no more - it works brilliantly, and makes this 50-year old musical feel like it was written today. British director Marianne Elliott brought her new vision of this piece to the West End several years ago (with Sondheim's approval, of course), and the Broadway production was scheduled to open in April 2020. We know how that story goes, but now it has finally arrived! I saw a preview and loved everything about it (even Patti LuPone's understudy, Anisha Nagarajan). Not only is the gender of Bobby/Bobbie flipped, but so are several of the characters; the square stay-at-home parent is a man with a wife who works out of the home, the "runaway bride" is a gay man afraid of marrying his too-perfect boyfriend, and three men complain about dating Bobbie ("You Could Drive A Person Crazy" - a highlight). It's just a genius way to explore the ideas of marriage, relationships, and gender norms in a fresh new way.
Another brilliant thing about this revival is that it's staged as if this is Bobbie's dream or hallucination, a take I've never seen before. It's as if she's wandering through her memories observing her life, at times literally when another actor dons Bobbie's signature (and fabulous) red jumpsuit while our Bobbie observes. Combined with the clever set (designed by Bunny Christie) that includes trap doors and over- and under-sized props, it has almost a "through the looking-glass" feel, or "ghost of Christmas past." It's like we're inside of Bobbie's brain as she wanders around trying to make sense of this crazy thing called marriage. The dreamy cast is led by Katrina Lenk, in a role so completely different from The Band's Visit, for which she won a Tony (the first of many, I'm guessing). Her voice is amazing on these songs usually sung by a man, with such heart and vulnerability. But the great thing about Sondheim is that he doesn't write solo shows, and in many ways this is a true ensemble piece. There are too many highlights in this incredibly deep cast to mention, and they each have a moment to shine. In short, everything about this show is so perfect, so relevant, so fun, so engaging (even without Patti!). It's everything I'd hoped it would be, and more.

*Once again, I'm using an abbreviated Fringe-style summary for my NYC 2021 trip, since I am in the greatest city in the world with much more exciting things to do than write! Click here to see all of my Broadway-related blog posts.